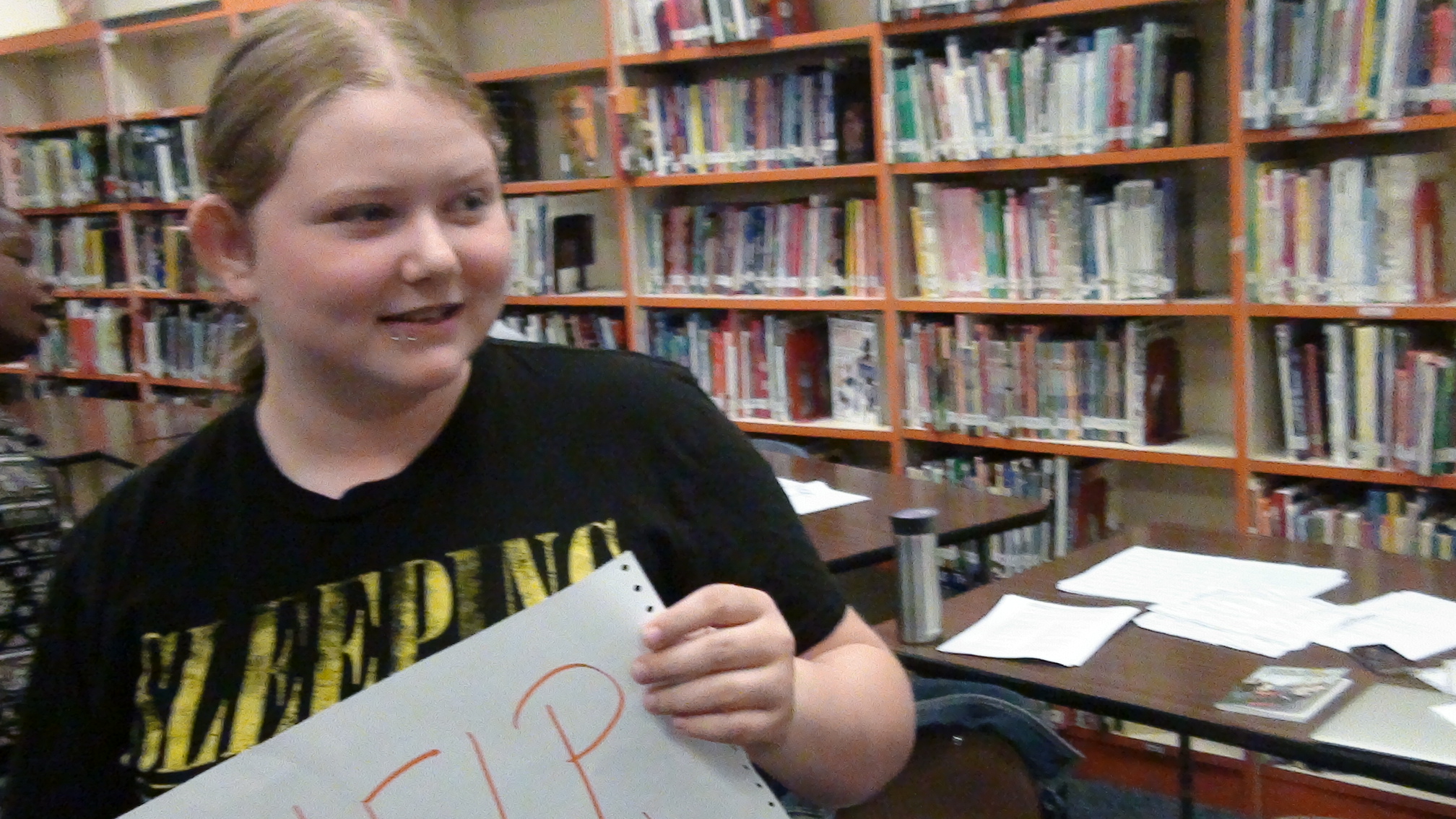 Our project, Changing Directions, is a new approach to reading complex texts that began for all of us more than six years ago when we participated in a teacher professional development program using dramatic approaches to ‘stand up’ and interpret Shakespeare’s plays (http://www.rsc.org.uk/education/resources/bank/ ).  We worked with teaching artists from the Royal Shakespeare Company in Stratford, England as well as faculty from Ohio State University to learn how to blend drama practices with a focused inquiry while reading and interpreting challenging texts (https://shakespeare.osu.edu/education and https://sites.ehe.osu.edu/bedmiston/teaching/  and http://news.ehe.osu.edu/2015/09/02/bringing-life-to-literature/ ).

The drama practices we learned included guiding students through warm-up games and ‘ice-breakers,’ teaching students to ‘walk the space’ and then create images of an idea or scene, setting up tableaus, working ‘in role’ as a character, and moving with words to feel their intensity and direction. This work is active and carefully planned to support multiple representations of themes, character relations, vocabulary, and motivations.  Our students (grades 2-12) love to be ‘on their feet’ for learning as often as possible.  We are committed to making learning active and engaging for all students, but we also want to be sure that in the midst of all of the movement and image-making, we help our students move back to the text as they consider the meaning and impact of specific words and phrases that can inform a deeper understanding of the text as a whole.  By returning to the words after an initial active exploration of the world, we can also sharpen and expand the ways we represent our interpretations of the text.

Digital tools make it possible to blend dramatic representations and storytelling (Alrutz 2014; Edmiston 2014; Lambert 2010).  Using digital images, video, and audio, we could  document –and reflect on–the ways we entered into, interpreted, and claimed an understanding of our  story alongside the original text.

The next sections describe our plans and inter-actions:

1. Walking with Images: The Steward Family Comes to Life

3. Hurricane Katrina and the Power of Words

Planning for Inquiry: Imagining family in the wreckage of Katrina

Over five weeks, during a summer reading program, twelve middle school students and their teachers, Allison Volz and Gayle Benjamin, studied the events and decisions that contributed to the human disaster of Hurricane Katrina in New Orleans.  The teachers were able to purchase a class set of the book State of Emergency: True Tales of Survival in the Wake of Hurricane Katrina. This book was created by Sari Wilson to  provide an abridged version of two stories, A.D.: After the Deluge (Neufeld) and Zeitoun (Eggers).  Both stories feature adults and their families who lived through months of fear and uncertainty as New Orleans was turned upside down.   Wilson also introduces readers to the authors, Neufeld and Eggers, who describe their interpretation and storytelling process related to these events.  The book is relatively short, but the format, layered storytelling, and vocabulary are rich and challenging.   This book is also part of a series of books called ‘On the Record’ that is informed by  Alfred Tatum’s social justice inquiry platform.  During the first two weeks of reading, Allison and Gayle focused on the question “How do you work with other people to make a difference?”   In both their ELA and Science classes, the students were able to build a strong understanding of the science of hurricanes, how they are tracked, and how people and government agencies responded as Katrina’s havoc unfolded.

As students moved into more dramatic inquiry, they asked the more focused question: How did people living in New Orleans’ Ninth Ward pull together during the worst natural and human-made disaster in U.S. history? How did they hold on to their dignity and human rights?

We returned to both inquiry questions as students viewed images, read, reread, wrote, and participated in dramatic representations and performances of their learning.

To move from general information about hurricanes to a focus on Hurricane Katrina, students first participated in a gallery walk of post-Katrina images as well as images of the storm from space. During this walk students closely examined the images, stopping at the one they thought was the most interesting and discussing the images with classmates. Their discussions focused on what stood out to them and why they were drawn to it. The gallery walk also encouraged them to pose questions about people’s experiences as well as more questions about the storm itself.
Students were especially moved by the images (linked) that pointed to human suffering (a lost, muddied toy; waiting and seeking rescue on a rooftop) and the chaos Katrina exacted (truck in tree). With these images in mind, and their concerns expressed about the gravity and extent of the disaster, Allison and Gaye guided the class through the first narrative in State of Emergency.
“As a class, we first read the excerpt of the graphic novel, which features two friends, Abbas and Darnell, who stay in New Orleans to protect Abbas’ store. Once they survive, they use the supplies from the store to help other residents who were stranded. After reading this story, we read 2 stories of survivors, in one case the family left for Arizona and never returned, and in the other, the family returned to rebuild. From these stories, students created their own mini graphic novels.”
In preparation for reading the next story, Zeitoun (Bearing Witness), we read an article about the fears and concerns expressed by undocumented immigrants post-Katrina. Even though the graphic novel we read featured an immigrant family, their status was not central to the text. This was contrary to the story of Abdulraham Zeitoun, the main character, who was a longtime resident, businessman and citizen in New Orleans, but was mistakenly and tragically viewed by National Guard and local police as not only ‘illegal’ but also a potential terrorist.

One week after all of the students had read about and discussed the events leading up to and following Hurricane Katrina, and after reading State of Emergency, and creating mini-graphic stories, Allison, Gayle, and Pat planned a sequence of experiences  that invited students to represent an imagined family living in New Orleans in August 2005.   We agreed that by creating a family who just got along (more or less) and did all the regular (and crazy) things families do, students could begin to experience how radically changed everything was for people in the Ninth Ward. The students could begin to feel the effects of having your family’s multi-generational home destroyed, loved ones accused, lost, or dying, and your city’s resources and legal system suddenly unavailable or in disarray.   Within this tension between family strength and a city’s unravelling, students could begin to find their own sense of strength and the need to be advocates – who act on their own and others’ behalf, in the midst of great loss.

Pat led a series of drama representations that gradually built into a history of relationships among the imagined Steward Family.  Through their imagined and ‘lived through’ experiences, students made deeper emotional connections with people they had read about in State of Emergency.  The reality of Katrina’s effects began to feel like something personal and connected to their own lives.

The plans we followed to create the Steward Family of New Orleans, Lower Ninth Ward, began simply, with directions to the group, to walk slowly through an open space, designated for our work, in the library where we were meeting.  Pat explained that when she called a number (2,3, 4) they should form a group of that many people, and then listen for the kind of ‘frozen image’ they would make. These images were quick drafts, not polished performances, so they have about 2 minutes to put their image together.

Pat planned for six different images, with each one representing a sense of close activity, shared celebration, or quiet times among family members. After everyone made their frozen image, Pat asked them what they were feeling or thinking.  The details of their sensory experiences helped to enliven and deepen everyone’s belief in the family’s presence.

Following our work on images of the Steward Family, Pat asked everyone to write a favorite memory from the viewoint of a family member, young or old.  Pat narrated a history of the family, describing how  many generations  have built a life together in this home in the Ninth Ward.  Directing ther writing, Pat said:  “Decide who you are and what you want to always remember about a time you shared in this house with your family.

Following our work on images of the Steward Family, Pat asked everyone to write a favorite memory from the viewpoint of a family member, young or old.  Pat narrated a history of the family, describing four generations who had built a life together in this home in the Ninth Ward.  Directing their writing, Pat said:  “Decide who you are and what you want to always remember about a time you shared in this house with your family.”

Students wrote for fifteen minutes, composing the images and details of their experiences as members of the Steward family. Pat worked with each student to select a line or phrase from their writing that would contribute to a group poem, representing the Stewards’ shared lives in their family home.  Everyone described their memory in first person and named themselves as a family member.   As Pat read from their writing, creating a group poem, she translated the first person writing into a unified voice:

This house is old, old, old.

It was my grandma’s.

She grew up in it

And so did my parents.

They gave it to my mom and dad to start their family.

All of my aunts and uncles have had to sign the papers.

When I get older, maybe I could get the house.

It’s been in my family for years and years.

The day when Josie turned one

Our friends came to help.

Some work needed done on the house.

I worked on the roof.

Our friends worked on painting the door.

Then we had some quiet time so we could get ready, sleep,

Then we partied for hours.

Singing Taylor Swift and dancing with my friends.

We were so proud of her.

When I went on the Banshee. It was fast.

I was five. I ate pepperoni and pineapple pizza

With my older brother.

We was all in the kitchen at 2AM

And grandpa was drinking his coffee.

On my grandma’s 75th birthday

everyone threw her a surprise birthday party

We actually put 75 candles on the cake.

“We are going to need a fire extinguisher!”

This house is old, old, old.

It’s been in my family for years and years…