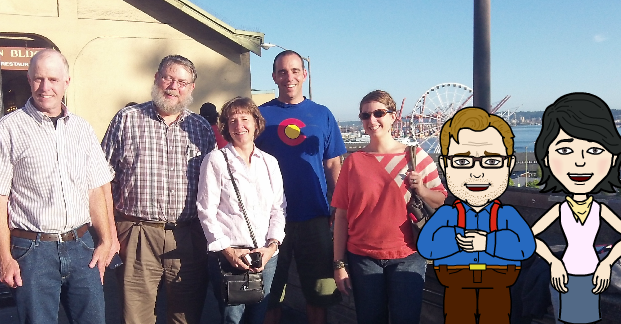 The process of planning a MOOC can be a whole project in and of itself.

For CLMOOC, the facilitator team was very involved in the planning process. For many weeks before the MOOC started, we had weekly web meetings in Google hangouts to plan the MOOC. We also used Google Docs extensively to record our meetings. In these meetings, we talked about our goals, our ethos and guiding principles, how we’d divide the work, and many other issues.

We spent a lot of time planning…really, a lot of time, but in hindsight, we think it’s one of the things that made CLMOOC successful.

In this ongoing series on hindsights regarding #clmooc, I think that one of the most important elements of our success was the team.

I believe strongly that active facilitation is critical to cMOOC success. Those that have weak or nearly non-existent facilitation do not often thrive. This is, of course, a challenge of time, commitment, and sometimes budget, but it is essential. In this regard, #clmooc soared.

The team for #clmooc was in a word, amazing. There were many ways in which this team was assembled and then worked together that contributed to our success.

And then there were the individuals themselves.

Elyse Eidman-Aadahl, Paul Oh, and Christina Cantrill brought bold and bright leadership. They had a vision, but also asked the team to bring our own vision to the project and to build out whatever new tools and ideas we had. Most importantly, they empowered us to be our very best as a team. We were given not only chances to use our voice at every turn, but also admin rights and lots of support, which was a huge part of #clmooc being what it was.

Joe Dillon reminded us at every turn that however participants took part was good and acted as a voice of encouragement. I will forever hear his strong, comforting voice saying “Karen, you are ok, and however you participate is ok.” He consistently reminded us that there were all kinds of people in the MOOC and that we should keep them all in mind as we proceeded. #clmooc was a better place for his leadership.

Chad Sansing took us to unexpected and often higher levels in our thinking about learning and was an ever-present “hologram” in our many spaces. He always encouraged us to hack, to make the web, and to think of our students in new and more meaningful ways. (And personally, I want to thank Chad for Walk Out, Walk On. It is changing me.)

Anna Smith joined us from a different locale each week and asked questions at every turn that took us to new points of departure. She brought clarity to us through these questions. Anna also prompted our noticing and sharing with Find Five Friday (#f5f).

Kevin Hodgson – ah, what a force of nature he is! Kevin made movies, made music, wrote posts, made makes, and much more. His words, pictures, thoughts, and feelings inspired and delighted. I will be continuing to catch up on Kevin’s prolific output for months to come. I feel lucky to have Kevin as a friend.

Stephanie West-Puckett helped us to understand and bring the Connected Learning principles and ethics into everything we did. She also brought the playful lightness of toys and children into #clmooc. I always felt that Stephanie was there to help boost me up when I fell short and for that I am grateful. There is nothing like feeling you have someone strong there for you when you need her.

Terry Elliot brought so many things to #clmooc that I am hard pressed to hone in on what to say about him. Always able to produce a perfectly delightful and simultaneously intellectually stimulating comment at just the right time, Terry was a special friend to me during this summer. He helped me to be more comfortable with my rough edges and he encouraged me to make my voice heard, especially when I felt unsure and not up to the level of the rest of the group. And of course, there are the roosters. 🙂

Jordan Lusink kept us organized and smiling! She performed many, many behind the scenes tasks that supported us, and #clmooc couldn’t have been without her and her team.

And of course, there was the community. There are too many to name, but so many of you took on leadership roles. That, to me, is the true proof that we achieved a vibrant peer learning community where we were all facilitators, all teachers and learners. For me, that was one of the biggest successes of #clmooc.

Thank you all for a truly great summer of making and Connected Learning. I appreciate each of you deeply.

Making a MOOC: What we learned in #CLMOOC
CLMOOC is a collaborative, knowledge-building and sharing experience that is open to anyone who is interested in making, crea...
by Team CLMOOC