Boss Level at Quest to Learn: Connected Learning in a Public School

Quest2Learn is a pioneering public school in New York City that offers a promising new model for student engagement. Designed from the ground up by a team of teachers and game designers, and firmly grounded in over 30 years of learning research, Quest to Learn re-imagines school as one node in an ecology of learning that extends beyond the four walls of an institution and engages kids in ways that are exciting, empowering and culturally relevant. 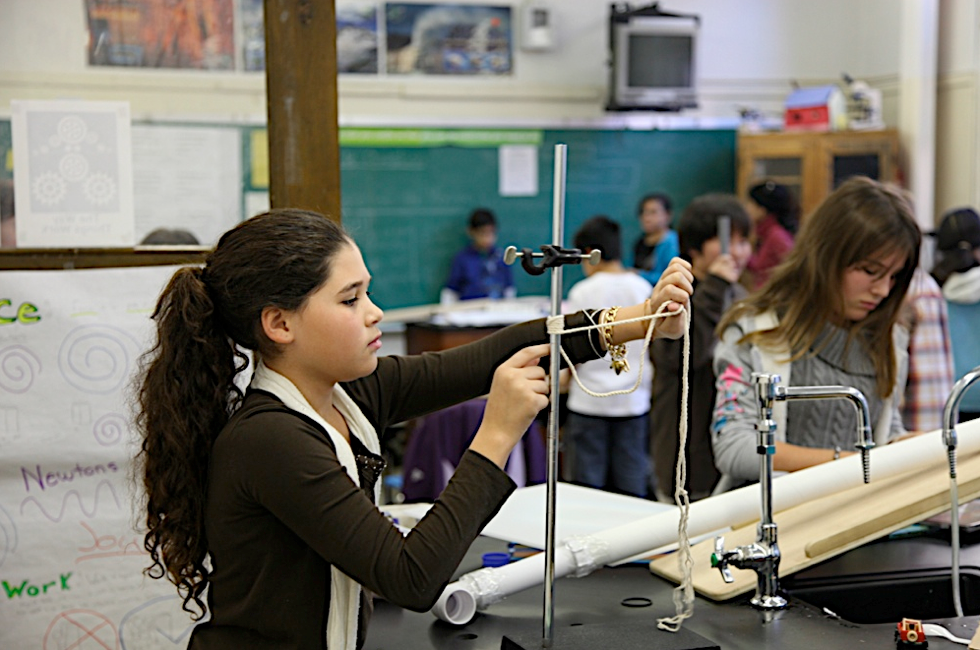 A toy replica of a 1950s pickup truck with a 100-gram cast iron weight in its bed races down a wooden plank and crashes into an upright textbook that rests precariously on the edge of a high stool. The book wobbles and then topples several feet before smacking the floor with a loud slap. As it falls, the book collides with the raised end of a yardstick whose middle rests over a makeshift fulcrum, creating a seesaw-like lever. The impact catapults a small bottle of hand-sanitizer a few inches into the air before falling and bouncing on the floor. “Hmm,” says the 11-year-old student who released the car. The student and her classmates have been challenged to build a Rube Goldberg machine – a complex machine that performs a simple task – that can dispense hand sanitizer from a bottle with a pump-top. One of the student’s teammate suggests, “Let’s try a larger stool.”

This is Boss Level, a special two-week period that takes place at the end of each trimester at Quest to Learn, a 6th- through 12th-grade public school that opened in Manhattan in the fall of 2009. Quest is the first school in the country to organize its entire curriculum to be “game-like”; it is also attempting to incorporate many of the Connected Learning principles discussed on this site into an urban public school. Boss Levels are the times during the school year when these principles are most fully realized. During Boss Level regular classes are suspended, classrooms are rearranged into workspaces, teachers fall into the background, and students work in small teams on a single “challenge” that culminates in a showcase and party for the school’s educators, staff, and family members. In addition to Rube Goldberg machines, Quest educators have challenged students to write and put on a performance of short plays based on fairy tales, to design and orchestrate a series of outdoor games for an end-of-the-year field day, to research and construct a travel website featuring three NYC neighborhoods, to build a sculpture from recycled materials, and so forth. In each case, Boss Levels attempt to weave together Connected Learning principles with the strictures of school-based practices.
Back to top 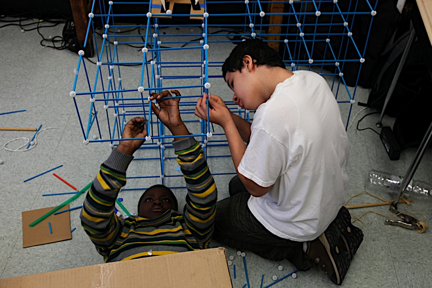 Students drive activity during Boss Levels more than at any other time during the year. While educators put students onto teams and define the challenges, students take the lead in designing, discovering, and evaluating possible solutions. Students provide each other with ongoing feedback about each other’s ideas and work styles. Peer education is an important part of the curriculum: students exchanging interests and expertise with one another. They engage in delicate, and often difficult, negotiations over what their team should try next, who should do what, and who can tell or ask someone else to do something. While failure is commonplace, and while conflicts sometimes arise, educators resist intervening extensively. In general, students are active and highly engaged, and the classroom is often vibrant and boisterous.
Back to top 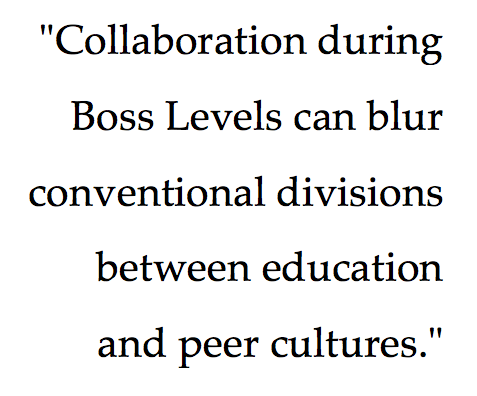 While Quest educators define Boss Level challenges, students have extensive opportunities for connecting Boss Level projects to their own interests, many of which are dissociated from conventional schooling practices. For example, when a Boss Level challenge asked students to write, stage, and perform short plays based on fairy tales, students wove numerous interests and cultural forms from their out-of-school lives into the productions. One scene took place in a medieval coffee shop called “Moonbucks”; plots and characters drew inspiration from popular books, video games, music, and movies; several students with an interest in fashion worked on costumes; a student who was enrolled in an after-school program for gymnastics helped choreograph stage fights; students who participated in online fan fiction communities worked on scripts; students who were interested in media production helped with recording and mixing sound effects; all students produced daily podcasts that provided updates about their projects to family members. In doing so, Boss Level blurred conventional divisions between education and peer cultures.
Back to top 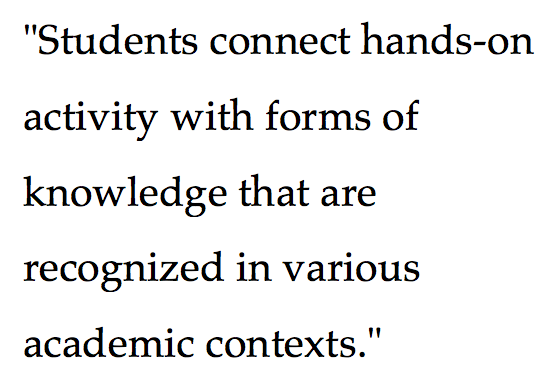 Boss Levels confer academic legitimacy on creative activities that are typically absent or marginalized at conventional schools. By treating Boss Level as the culminating academic experience for every trimester, and by showcasing the students’ work to family members and members of the New York City design community, Quest bestows academic legitimacy on forms of work that are not easily measured by standardized assessments. At the same time, Quest attempts to link Boss Level challenges to more widely recognized academic domains and competencies. For example, the Rube Goldberg challenge required students to put into practice knowledge about physics and simple machines that they had been learning about over the course of the trimester. Similarly, Boss Levels encourage students to approach design challenges from the perspective of “systems thinking,” a twenty-first century literacy that educators emphasize in their instruction throughout the year. So, for instance, when tinkering with a Rube Goldberg machine, or when writing a play, or when designing a game for the field day, educators encouraged students to think of each design challenge in terms of its components, rules, goals, feedback mechanisms, and other aspects of a dynamic system. In doing so, they connect hands-on activity with forms of knowledge that are recognized in various academic and professional contexts.
Back to top 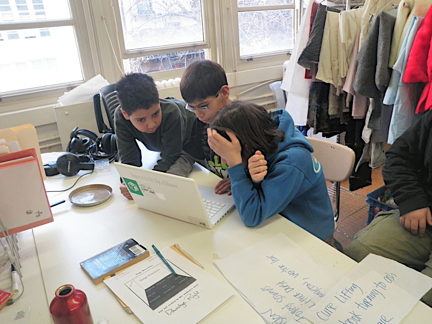 Boss Level is a time when production and performance are paramount. As already noted, each Boss Level requires students to work together to make something that they do not yet know how to make. Educators encourage students to try numerous ideas and to fail often, noting that each failure offers a learning opportunity that can inform further rounds of iteration. The bulk of each school day is allocated to working on these group productions. Instead of rotating between different academically themed classes every 45 or 90 minutes, students work for several hours at time on their projects, moving fluidly between intensely focused work and more casual genres of practice, such as messing around. In addition to changing temporal routines, Quest reconfigures its physical space during Boss Level. Desks are moved out of rows and clusters and each team is assigned a dedicated workspace that they retain for the duration of the project. Teams travel to different locations to attend short skills-based workshops, but they always return to their workspaces, and they are allowed to leave their in-progress projects in place at the end of each day. Students from other teams often walk by each other’s workspaces and observe and comment on the various productions underway.
Back to top 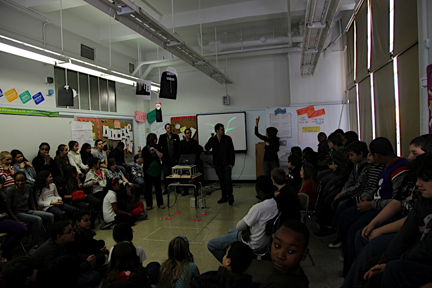 In addition to synthesizing a trimester’s worth of schoolwork into a single project, Boss Levels connect school-based practices to resources, institutions, and persons beyond the school’s walls. For example, for the fall 2012 trimester, eighth graders chose between several Boss Level projects, each of which was supported by a different NYC cultural institution or expert practitioner from the city. Partner organizations and persons included the MoMA, the Nuyorican Poets Cafe, the Museum of the City of New York, a professional Flamenco dancer, and a Parkour expert. Additionally, family members and educators donate much of the materials – from old magazines, to cardboard tubes, to foam-core – that students use for their projects. Students use the internet to collect media and research their challenge, and they use digital production tools for prototyping, modeling, and communication. At the finale for each Boss Level, a jury of professional creative practitioners offers feedback and awards prizes for especially noteworthy productions.
Back to top 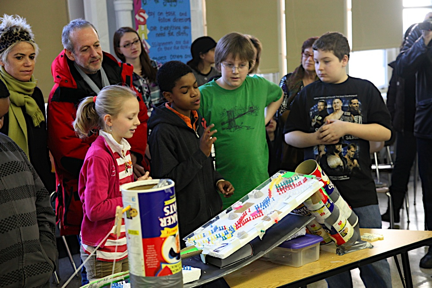 As noted above, during Boss Level educators organize students onto teams that they belong to for the duration of the Boss Level. Team members work together on a single project and educators act as an advisers that provide assistance rather than didactic instruction. Educators also recruit creative professionals from outside the school to offer feedback and guidance at various stages of the process. While educators evaluate students’ individual contributions to Boss Level as part of their summative term assessments, the showcases at the end of Boss Levels focus on group, rather than individual, accomplishment. Teams compete against each other for kudos and awards but they are not ranked against each other according to a single metric. Many challenges also connect to communities of practitioners that share an interest or purpose to the ones being addressed by the challenge, whether those persons are environmental activists, digital artist, actors, designers, or animators.
Back to top

Realizing Connected Learning principles in a public school setting is not without its challenges. For one, Boss Levels can be seen as taking time away from preparing for state tests. While Quest hopes its students will score highly on tests, its students are evaluated against students who attend schools that place greater emphasis on testing. If the school cannot produce competitive test scores, many families will not apply to the school and the Department of Education could force it to change its leadership or even close. Given these realities, Quest is under constant pressure to scale back on less canonical offerings such as Boss Level, and it has had to diminish the number and duration of Boss Levels as it has matured.

Additionally, the school has had to educate some parents about the educational value of experiences like Boss Level. Less-privileged families, in particular, have pushed the school to focus more on canonical pedagogic offerings, in part because their children’s options in the NYC school system largely depend on test scores. Further, families from various backgrounds have expressed unease with the some of student-centered aspects of Boss Level. The frenetic, messy, and often noisy character of Boss Levels can appear to some as chaotic and undisciplined rather than as engaging and invigorating. Quest educators have responded to these challenges by attempting to educate parents about the forms of learning supported by Boss Levels, and over time many parents have come to see, and even celebrate, Boss Levels as important and unique educational opportunities. Educators have also had to make Boss Levels more structured and adult-managed as the school has matured, partly to ease parental concerns.

Despite these challenges, Boss Levels offer an encouraging example of how Connected Learning principles can be integrated into public schooling. Unlike most canonical schooling practices, Boss Levels organize students’ activity around a shared purpose and they provide students with numerous opportunities for active and creative problem solving. Students, rather than educators, drive the process. Solutions are not defined beforehand and resources are not bound by the school’s walls. As a result, students have the opportunity to participate in the challenging, messy, collaborative, and open-ended processes that we believe characterize Connected Learning at its best.

All photos copyright of the Institute of Play. Originally posted to ConnectedLearning.tv on July 17, 2013 Back to top