Bootstrapping in the Community

Last summer, our Writing Project site began to explore digital learning narratives based on the exciting work Peter Kittle presented at Digital Is in Philadelphia.  We were wanting to explore learning narratives through our work with the NWP Urban Sites Network project because we felt like the students in the large metropolitan area where we teach and work and live were learning and knew many, many things that were not showing up in definitions of “school” learning and certainly not on assessment.  We based our thinking about this project in readings on Funds of Knowledge, Identity and Digital Composing.

With all of this reading and thinking in the back of our minds, we used a five day retreat to create our own learning narratives and think together about ways to implement them into the classroom.  When I was asked to create this resource, I immediately thought of using student work to illustrate the kind of counter narratives we were working to create.  But then, my composing and thinking pals reminded me that our messy process is the heart of our work and if I really meant to talk about that, I had to begin with my own first attempt at a digital learning narrative.

Digital Learning Narrative Draft One.  Disclaimer.  This is truly a first draft – misspellings and all.

Layer One: I Don’t Know Anything that Would be Appropriate for this Setting.

On the surface, an assignment that asks students to create digital learning narratives in which they explore something, anything that they know about and are learning about outside of school, feels quite inclusive and welcoming. Even more so if the classroom space offers the children all of the materials they might need in order to compose the piece.  However, in doing my own, even in this close knit group of people whom I’ve been thinking and writing with for over a decade, simply coming up with a topic was paralyzing.  I immediately felt that even though I was halfway through a doctoral program, I’d never learned anything that would work for this “assignment.”

I finally settled on learning yoga. I was feeling a bit silly about it, but my group reminded me that this “silly” feeling was exactly why I should choose this topic. Wasn’t this what we were working towards?  Weren’t we looking to find ways to bring the things that our students had learned outside of school into the classroom and value them in ways that could enable students to see themselves as learners?

Layer Two: Fear of the Technology

We had two days of intense conversation around our readings and what we were trying to do, and then a full week with this conversation fresh in our heads and our community always accessible on Skype, to craft and compose our own narratives.   I found myself paralyzed by the technology.  I was surprised by this because I’ve used Movie Maker and I-movie many times for various projects, but something about this piece, this digital learning narrative, seemed much more public than anything I’d done before.  If I’m honest, I was also totally intimidated because it was about me.   Everything I’d composed before had been about someone, or something else.   I started to worry that my group would think my tech skills were deficient and that my finished product wouldn’t be up to par, and that I was deficient for being interested in this topic.  Of course, there was no “par” my people reminded me.   We were all trying this for the first time, and this was about the experiment of attempting to compose in this way. They reminded me that all I was bringing was a draft. On top of that, this was a safe, non-judgemental space.  If yoga was important to me, then it was a great topic.  And so, with their voices cheering me on constantly in our Skype group, I was able to “play” with the technology in the same way that I hoped my students would.  Still I worried.  Now layer one was mashing all up in layer two.

In the end, I told the story of learning yoga and the construction of a yogi identity.  I labored over how much to tell, and kept trimming and trimming.  I collected images in order to tell the story in my mind and then found a way to include both my voice over and music in I-movie.  I was so tickled to have pulled that off that I couldn’t wait to share.

I showed my video.  Everyone watched.  And then everyone said things like “Wow, that was really good!”  “I love the way your music is working with your voice over!” “Cute dog!”  “The picture of the hip sort of grossed me out!”   “Wow!  That side crow at the end is wicked!”

And then Lil said, “But what I’m wondering is, where are all of the people in your narrative?”

And that’s when I realized that what I’d created was a perfect reproduction of the dominant bootstrap narrative of learning.  I was a runner.  I tripped and hurt myself.  I decided to let go of running and pursue yoga.  I then taught myself yoga and transformed my own identity.  Through hard work and perseverance, I single handedly overcame an injury and recreated myself as a strong powerful person.

Lil’s words named the tension I was already feeling.  All of the drama and anxt over creating this narrative was based in my dominant “good girl,”  “good student” narrative where I wanted to do a “good job” and the “right thing.”

In the first two days of our institute we had combed through our annotated bibliography and discussing the ways in which we hoped these pieces would come to challenge the dominant narratives of schooling in the United States.  We wanted to challenge not only what counts as learning, but to really think about the social nature of learning, in contrast with the narrative of learning on one’s on, in isolation.  I had all of that in my head, knew that was what I wanted to critique with this work, and still, I slipped right into that dominant narrative of being a good student, learning in school.

So, How’d That Happen?

The really bizarre thing, to me, is that in my head, as I was composing the draft, I had been thinking of all who contributed to my yogi-ness.  One reason I had chosen this particular narrative is because of a close friend of mine through the Writing Project, who had actually coached me through my major issues with yoga feeling “too slow” and therefore, in my mind, not cardiovascular exercise.  She introduced me to Vinyasa yoga, helped me find a video to work with, and asked me about it regularly, pushing me and encouraging me.

And that’s just one person in the plethora of people that were a part of my Yoga learning. There are plenty of others:  my husband and children, who gave me time and space to pursue yoga, my friends in the neighborhood who organized a Sunday afternoon yoga event in someone’s basement that pushed me to get out of my own living room and practice with others and with a teacher,  my friend Tony who has been committed to the practice of yoga for many more years than I have, and talked me regularly about fitting his practice into his busy life.  And that’s just the first string.

And then there are the other layers.  As an upper middle class, married white woman, I have the resources to learn about and practice yoga.  I have a flexible job that allows me time and space to learn about and practice yoga.  I have the financial resources to buy a video, to pay for classes, to have enough energy and hours in my day to practice for an hour.   I have the access to the internet in my home and a lap top computer that makes information about yoga accessible to me 24 hours per day.  I have a wonderful family doctor who is sports minded, but also progressive.  I was able to do physical therapy in the same room with NFL football players.

These things made yoga a possibility for me.  Without them, all of the hard work and perseverance I could muster wouldn’t have brought me into that glorious side crow at the end of the clip.

But I was wrestling with the technology and trying to produce a product that wasn’t too long, and that dominant narrative is so pervasive in our ideologies, that all of that got papered over and cut out, left in a pile of virtual film on the editing room floor.

So What? Linking Back to the Community

So, here I am posting my big faux pas on a national site in an attempt to make available the messy nature of learning, the social process of it, and the ways that power and privilege play into what we learn and how we learn and how we narrate what we learn.  Over that past year and a half, I have revised and re-visioned the yoga movie with cut-ins of me talking to myself and pointing out where I’m editing out sociality and sliding head first into bootstrapping.  But in our site, as we think and talk about this moment together, what we are seeing is that finished products like that one don’t show the process.  They paper over the story of how it came to be, and in that papering over the talking, thinking and learning that had to happen in order to make the product in the first place.  Even this piece that you are reading here has been mercilessly revised after being read by and talked about with my group.  And things are still missing from it, like the conversation in a partnership workshop where Lacy, Lil and Sally used my video to talk about the pervasive nature of the bootstrap narrative when we talk about our learning, or the conversation we all had when they were thinking about doing that.  I don’t have the countless conversations between Lacy, Lil, Rashid and I as we tried to negotiate the tight space of school designated by the state and district as “low performing” in order to compose digital learning narratives with 7th grade students.  I don’t have the story of Lacy and I sitting at an Urban Sites conference, chills running up our arms, as we watched the digital creations and face-to-face presentations of the Youth Roots gang.   I don’t have my conversation from this morning with Sally when she was telling me of her project to bring a little Youth Roots to Gaston County.  I don’t have my conversation in the car with Steve and Lacy on the way to the retreat where I wrote this resource here for you to see, because I didn’t have a camera rolling or a digital recorder at hand as it happened.  That conversation and hundreds more like it are a part of this narrative too.

Want to know more about the people and ideas behind this resource?
Click the image below to link to Digital Is (K)not, a resource to tie
resources together, created by the UNC Charlotte Writing Project. 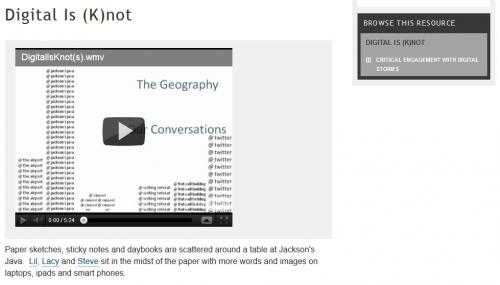