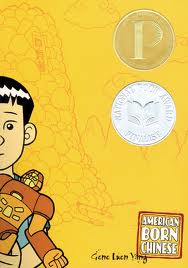 “Well, I think it gave me an opportunity to reflect on my experiences as an Asian-American, and that’s something that I still struggle with and I still have to think through. I think that this book has opened up a lot of really good conversations with other people, especially other Asian-American men, about our common experiences. And that’s been really good for me.”

So explains Gene Luen Yang, author of American Born Chinese to Rachel Martin, the host of NPR’s Bryant Park Project Report on 1/28/09. In this interview Gene Yang talks about the making of his book, the first graphic novel to be nominated for a National Book Award, and what he got out of writing it. He recalls how he got started by making copies at the local Kinko’s, selling them to family and friends, taking them to sell by hand at conventions, and considering a dozen copies sold to be a measure of success.

In writing “American Born Chinese” Yang drew upon his childhood experiences growing up as one of the few Chinese Americans in his predominantly white school in Northern California. While wrestling with all the usual growing pains of childhood, he also had to deal with stereotypes and subtle forms of racism.

Rachel Martin confirms with Yang that in this graphic novel, he is really telling three stories in this novel: the Monkey King (legendary Chinese folktale), Jin, the Chinese-American boy growing up in a white suburb (semi-autobiographical), and Chinkee, the over-the-top Asian stereotype.

When asked about the primary identity issues that he wanted to address through the character of Jin, Yang explained how shame of his parents’ culture deterred him from making friends with a new student from Taiwan who followed him around speaking only Mandarin. “As I look back on that as an adult, I can see that it really wasn’t about that kid. It was really – I was really dealing with something inside about me being ashamed of the culture of my parents.”

Martin concluded the interview by inviting listeners to check out the slideshow on NPR’s website to see what these characters look like, and understand a little bit more about what Gene was talking about.

Teachers of middle and high school students might find this book interesting for exploring themes of prejudice and racism, family life and school life, immigration and assimilation, identity and self- acceptance. How do these themes play out as the main characters struggle with their choices, deal with parental high expectations, and juggle the roles of culture and tradition in minority populations. In social studies classes, this book can be combined with other resources to study aspects of Asian or Chinese Immigration to the United States. English teachers might use the book to study the components of the graphic novel as a genre, discuss the importance of research, and evaluate how visual and verbal text work together to make a compelling story.

A companion piece to studying this graphic novel is “Hurdles,” a short story from  Same Difference and Other Stories (2003) by Derek Kirk Kim. In her resource, Graphic Stories: Hurdles, Bee Foster shares a video exploring how students interpret the interplay of text and pictures in this story dealing with the hurdles of prejudice and racism.

In late 2009, students in my second-year high school English class focused part of their reading and w...
by Dave Boardman

In late 2009, students in my second-year high school English class focused part of their reading and w...
by Dave Boardman