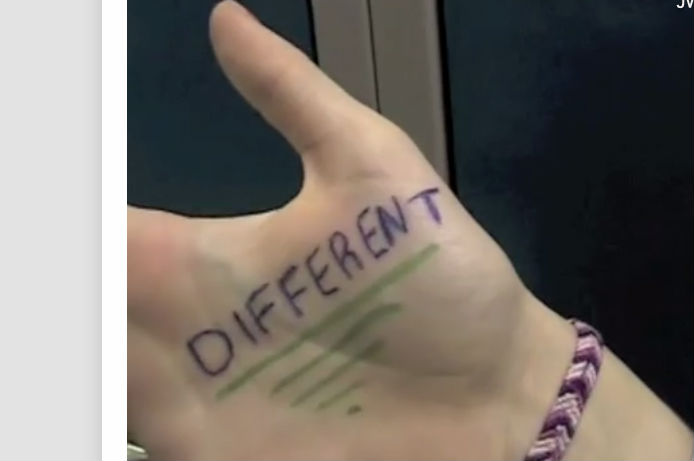 As a new teacher 10 years ago, I was a judicious writing instructor. I thought carefully about assignments, offered student choice, tried to make assignments relevant. Day after day when computers were in short supply and I didn’t know how to incorporate the few I had available to the best benefit – writing happened something like this: we started an assignment, went through the cyclical draft-write-edit-revise writing process with me marking up at least one draft, then giving extensive comments on the final, usually after about five hours of reviewing for a class of 20 essays.

In spite of giving up my evenings, early mornings and weekends, few students ever read my comments. Most looked at the grade, filed it away to throw out later, or just tossed it in the trash. I wonder if the comments weren’t more to defend the grade than to actually instruct my students. I can’t think of many for whom the process held much meaning; in fact the one memory that lingers (or maybe haunts) from those days is the image of an overeager mother thanking me for “copyediting” her daughter’s essay. The student didn’t care about the writing; she was a typical “good” student doing what she knew she had to for the grade.

Students often have writing experiences like those encountered in my early classrooms; they write because they are forced for an audience not of their choosing: their teacher. Compound that with formulaic structures, outdated modes like the barren, first-person removed essay, and even the idea that ancillary media – video, audio, images – are unwelcome in school writing. It’s little wonder that students generally find little opportunity to get excited about school-related writing: they have been systematically, and thoroughly robbed of their voice.

Technology, digital writing, changes all that. Consider this: 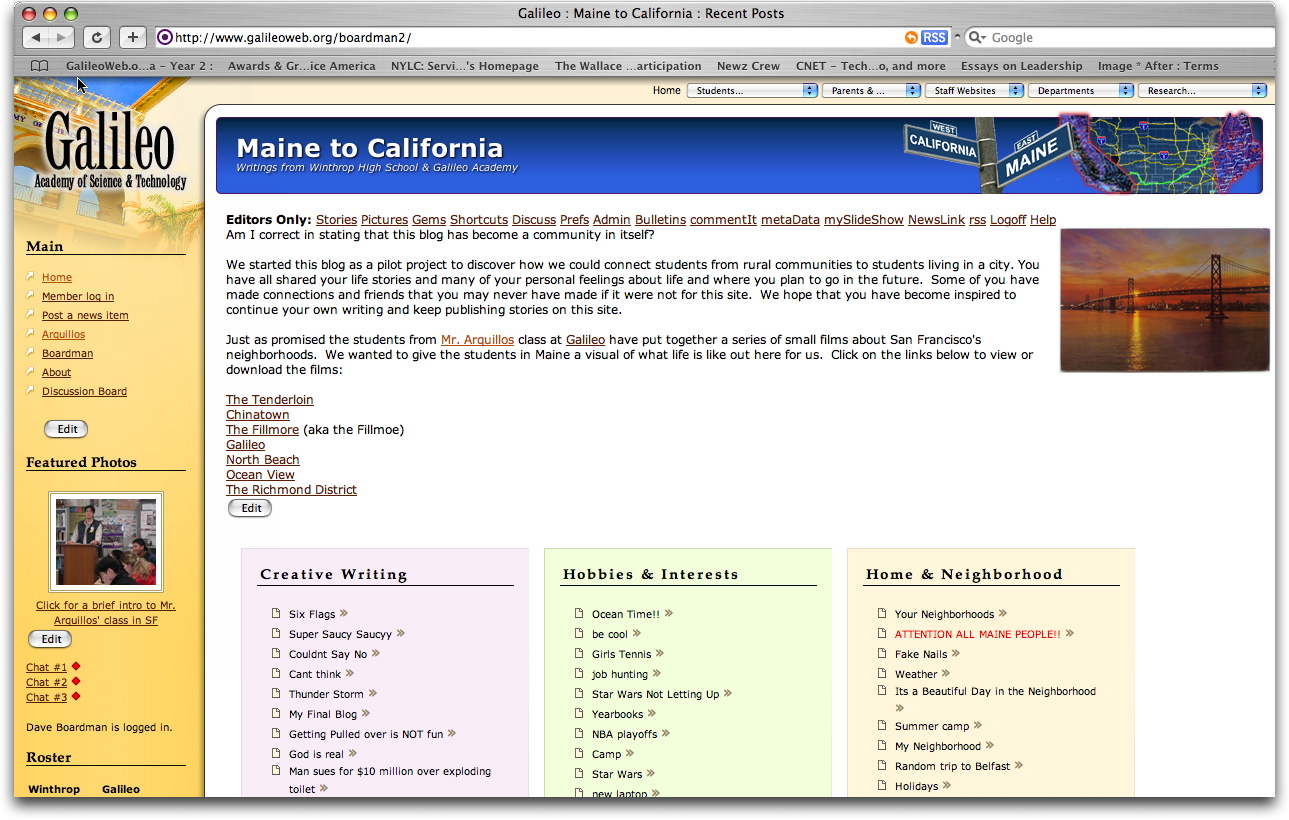 Back in 2005, nearly all of my students had the opportunity to join in Maine to California, a weblog shared by my students in Winthrop, Maine, and those of Joel Arquillos, then a social studies teacher at Galileo Academy of Science and Technology in San Francisco, now the director of 826LA, the Los Angeles writing center. Overnight, they went from writing—or not—for me, their sole audience, to instead writing to a group of teenagers on the other side of the country.

Everything changed. They suddenly found they were writing as conversation, the same thing they were already doing on their MySpace pages, Live Journal and Deviant Art sites, but this time, this writing was valued in school. They used their own language, they wrote about things that mattered to them, and they responded to the writing of another part of their online community. Yes, in a sense, this was another “forced audience,” since we kept the weblog closed to the general public, but my students found themselves connecting with the audience through interest, age, socioeconomic background, even through the diversity that we lacked in Maine but was prevalent throughout their audience in California. And they always had the choice of skipping this audience and just writing for me again. Not surprisingly, no one selected that option.

Over time, maybe as computers became a more integral part of school and my teaching practice, I realized a few things; those students who wrote in class were writing for the grade, not for themselves, their peers, or because they loved the practice of telling stories, creating worlds, or exploring thoughts. Their forced performance space was the front corner of my teacher desk, and I was their compulsory audience.

“I want to give these kids the tools to say, ‘Hey, my voice is important in this world,’ ” Mr. Arquillos said after the yearlong experiment. “This blog helps me do that.”

The George Lucas Foundation publication Edutopia also wrote about our collaboration in an article that stressed the online community created when students are allowed to use their voice in what I called the “digital hallway.”

The change from traditional, non-digital writing to technology-enhanced writing didn’t come without difficulty: allowing students to write for an audience outside of my four walls meant I couldn’t control what they wrote about, or more problematic for me as an English teacher: how they wrote. I wondered, does digital writing mean I ignore the texting slang, that absence of vowels, even the flirtations with poetry or rap that might skirt—or jump over—the traditions of English diction? Here’s what I quickly realized: when students find a genuine audience for their writing – standing in the way of how that writing takes place is counterproductive. I explored the issue through the eyes of Derek, one of the students who seemed to live on the Maine to California blog, in a chapter I wrote for Teaching the Neglected “R”: Rethinking Writing Instruction in Secondary Classrooms published by Heinemann in 2007. Years later, as my students still explore the different ways technology allows them to write, from weblogs to fan-vids, that question of “Is this really writing?” persists. Digital writing is something different, something steadily changing as the technology opens up new approaches and different possibilities. Even when the words are spoken instead of typed, flashed on a screen, or come blazoned with animation and guitars, or even posted on Glogster, the question still persists, and my answer is usually, “Yes. It’s still writing.”

In an interview at the end of his senior-year English class, Derek told me that writing on the weblog meant that “You don’t have your teacher telling you that this is the correct punctuation or this is the right way your sentence structure needs to be. It’s written as you feel it should be written. If you want to use slang or something, you put it in there. I mean, you can’t tell somebody how to write. They write the way they do, and on the blog, you can do that. You write the way you do.”

Readers can see Derek and several other students talk about this project and others in a film I produced for the Maine Writing Project: Reading, Writing and Computers: A Look at Technology and Literacy in Maine.

In Teaching the Neglected “R” I wrote, “I still wonder at Derek’s thought, that ‘you can’t tell somebody how to write.’ Many writing teachers would disagree, and at times, I do as well. But Derek wasn’t talking about the formal writing that develops a first impression with a new employer, or persuades an opponent to cross sides in an argument. His highly revised, formal writing produced a serious, reflective college essay, as well as an A grade in my course. The weblog, though, was often the place where he put his thoughts together and tried out his ideas, a space where he wrote the way he wanted to. And finally he wanted to write.”

In my teaching life, the words of Derek and his friends, kids who used writing to impress, communicate, hang out, and play, keep coming back to me as current students continually change the definition of what writing is as they explore and mix genres, sometimes creating new ones along the way. What’s impressive is that voice, that sense of individuality that gets stripped out of much academic writing, drives the process. One student, Josh, has steadily found avenues through multimedia to exercise his writer’s voice in ways that non-digital writing doesn’t offer. Josh’s digital story as a first-year English student traced his path of learning to play the guitar. It was his start in high school of exploring non-traditional forms of writing.

He produced his narrative knowing it would be shown in a class film festival, one of 20 stories we’d share in a class festival that semester. The piece might have some technical flaws, but consider this: a teenage boy spent days writing, editing, revising, and performing a story of his life, knowing the work would be shared before a live audience, and later, shared in this global community of teachers. Clearly, he was engaged in a way traditional writing approaches often to fail to engage. Josh was asked to become part of what Jenkins et al. (2007) term today’s “participatory culture.”

Writes Jenkins, “…we are moving away from a world in which some produce and many consume media, toward one in which everyone has a more active stake in the culture that is produced.” He and his team add: “Participatory culture is emerging as the culture absorbs and responds to the explosion of new media technologies that makes it possible for average consumers to archive, annotate, appropriate, and recirculate media content in powerful new ways.”

Josh and other students routinely produce media, writing, that looks markedly different from what was created in classrooms just a short time earlier. The relevance of voice in digital writing lies in that same sense of freedom that students like Derek found when writing for a weblog audience, the thought that somehow their ideas would be out there in the public arena, whether it was in a quest for YouTube hits, or just to establish a presence among their digital peers. In this participatory culture, wrote Jenkins and his colleagues, “Not every member must contribute, but all must believe they are free to contribute when ready and that what they contribute will be appropriately valued.”

Writing for a Worldwide Stage: Voice and Audience in Digital Media Production
by Peggy Marconi
Collection