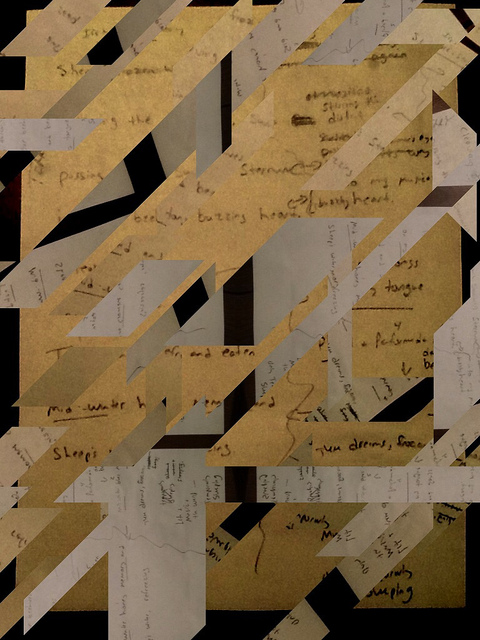 My good friend, Terry Elliott, released a poem into the wild the other day, and he asked that we remix it. I am not one to pass up a remix invite, and so I requested that he podcast his poem and share the file with me. What he didn’t know was that I was recrafting his words as a poem for two voices. In Audacity, I cut up his audio file, adding my own, and used sounds from his farm and from my own saxophone as the soundtrack.
The result is this collaboration known as Ice&fire&memory&music&songs&dreams:

This is what my page of writing looks like, with Terry’s words on the left and my word on the right, with arrows showing how I imagined I would lay out the audio files. Yeah, it’s a mess. But it was a plan, a map, a poem all of itself. One of the things I found interesting and difficult was how to connect the themes together in some way that made some semblance of truth. While he was writing metaphorically (I think) about life on his farm in winter, I shifted into music in the midst of winter. His “honey memory” became my “blues memory.” There are also a few places where I had our voices overlap. It didn’t work exactly as I imagined, and the quality of sound from his to mind is a sort of jolting shift (which I had to accept and move on with.)

But, I am pleased with how it came out and love that I could give a remix to a friend, particularly Terry, who spent the summer with me in the CLMOOC making crazy things together, including memories.
Peace (in the poem),
Kevin