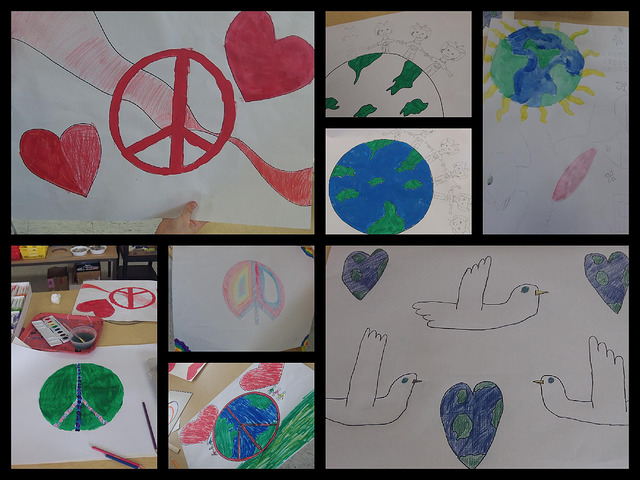 This was first shared at my blog — Kevin’s Meandering Mind — as part of the Making Learning Connected MOOC.

I hate to kill the playful mojo of the CLMOOC, which has been streaming in channels in social media spaces around the #untro — or “unintroducing yourself” by mashing up media and glitching images and smashing ideas. But in the midst of all this play, I can’t help but think about the headlines and events of the past week, and how identity in the form of flags and race are right now part of the national conversation.

Check out this interview transcript with Kanye West, who made a point a few years ago about the use of the confederate flag. As always, he went farther than he needed to, in order to generate controversy. Still, Kanye had a point — we can try to take media and mediate it for our own message.

“React how you want,” West said. “Any energy is good energy. The Confederate flag represented slavery in a way. That’s my abstract take on what I know about it, right? So I wrote the song ‘New Slaves.’ So I took the Confederate flag and made it my flag. It’s my flag now.” — from http://www.chicagotribune.com/entertainment/music/ct-kanye-west-confederate-flag-20150623-story.html#page=1

So , how do we make our own messages on where we stand when it comes to equity and fairness, and to get a bit fuzzy with it, peace and love and understanding towards everyone, no matter the race or creed or religion, or color of skin. How do we make a difference when we are not Kanye, with his platform to the world? How can teachers make a difference in their own communities?

At our “end of year” ceremonies for our sixth graders this week, one of the highlighted endeavors from the past year had to do with a Peace Poster art project. This project is overseen by our fantastic art teacher each year and is part of a Lion’s Club contest to have students represent peaceful ideas on the canvas. The theme this year was “peace, love and understanding.”

Take a look at some of their work:

And take a listen to some of their artist statements:

This brings me back around to the confederate flag issue in South Carolina — the move underfoot to remove the flag from public buildings — and the purposeful killing of those nine people in the Emanuel African Methodist Church, which seems to be rooted in deep racism and violence by the perpetrator. The confederate flag issue makes clear how powerful these media symbols are in culture, how people connect and identify themselves to the world, and how fragile/powerful those connections can be. At the heart of this controversy is identity, as some people see the flag as some landmark of heritage and pride. They use the flag as a cornerstone of their identity. We even see that confederate flag around here, too, in the northeast, in liberal Massachusetts, particularly with high school students who live in some of our more remote hill towns but come into town for the vocational school. I’m trying not to stereotype here. Not every student in the remote foothills are racist and not every student with a confederate flag on their truck bumper is intolerant. But it’s hard not to see that and think, really?

I’m not one who sees that flag that way, that it can be some source of pride of culture. It has too much history. I am more on the side of, this confederate flag represents oppression and hate and distrust. It has no place on public buildings. Anywhere. Period.

Is there a way for me, one teacher, to mediate media, as part the CLMOOC Make Cycle, to make a political point about this? To engage in the national conversation from my dining room table in Massachusetts?

I tried a few things these last few days, but all seemed to miss the mark. Either it was too overt or too mean or just ineffective in my ability to craft a message with media. My brand of poking fun through satire … it wasn’t working because the issue is bigger than that. I feel like I am failing here to use what I know, and experiment with on a regular basis, to make a point.

Luckily, Terry Elliott began a collaborative poem the other day, inviting others in to write stanzas and make a podcast (still unfolding in the mix stage by Terry) about the shooting at the “Mother Emanuel” Church. I felt grateful to be invited, as if maybe I was able to contribute something — a few written words, a few spoken words, some music — that empowered me to take a stand. I felt useful, and part of a community of others, making art to lead to some understanding. It may not resonate on the national stage. Kanye did not contribute to the poem.

But it resonates with us.

Maybe we shape our identities together. Is this the fabric and thread of the first Make Cycle? Maybe we Make a Better World. Let’s get started.