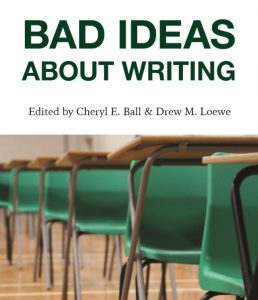 Regarding Instructor Feedback with Muriel Harris

This fall I stepped into a classroom in the role of the teacher for the first time.  After I got over the initial identity crisis of my sudden metamorphosis from student to instructor, I began to realize that the real learning could take place in terms of guiding students’ writing processes in a workshop-based environment. Beyond presenting lessons to the students, this occurred for the most part during our consultations in the classroom and when I gave them written feedback. 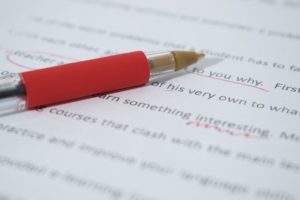 Having the privilege of being part of a seminar with others who were teaching the same course was instrumental in this process of learning which I look forward to resuming in the spring.  For instance, I was introduced to a book called Bad Ideas About Writing. One of the chapters that guided me in my efforts as an instructor was “When Responding to Student Writing, More is Better” by Muriel Harris.  Furthermore, I found her essay very helpful because it affirmed some of the notions I had about giving feedback.  More specifically, it influenced me to understand that providing more feedback does not necessarily improve students’ work; and it reinforced the notion that lower-order concerns need not, or should not, be addressed in most cases.

As the Purdue Online Writing Lab points out, lower-order concerns have to do with sentence structure, punctuation, word choice, and spelling (Purdue).  Since I worked in a writing center as an undergraduate, I suspected I should avoid addressing such concerns, but Harris dispelled any dissonance I had when I read the following point she makes in her essay: “When there is too much for the student writer to attend to, another result is students’ preference for selecting the low-hanging fruit.  They choose to focus on the more easily edited sentence-level comments, such as correcting a misspelled word, rather than tackling the more challenging comments about clarity, organization, or clarifying a main point” (Harris 271).

Thus, rather than marking up my students’ work with red ink, so to speak, I planned to regulate how students were fulfilling the requirements of assignments and how they were using writing as a tool for exploring and communicating ideas.  But when I initially began providing feedback, I couldn’t help but wonder whether I was providing enough.  For instance, although the average word length of my comments was around 120, I wasn’t sure if I should be providing them with lengthier commentaries.  This caused me to feel a good deal of anxiety at first.  But Harris’s essay reassured me.  In fact, she argues that too much commentary (1) is a waste of the teacher’s time and (2) tends to stifle students’ writing (269).

Moreover, beyond the way that lower-order concerns can serve as a distraction for students in terms of being the low-hanging fruit, Harris argues that providing too much commentary can make the assignment more complex for students than it needs to be.  Also, she points out that students can often become confused by the prose of instructors.  Thus, the main takeaway I have internalized from Harris follows: “One possibility is to focus only on a very few concerns that the student can work on, and that includes reducing the number of marginal comments” (271).  This changed my understanding of providing feedback because it reassured me that the notion of effective feedback isn’t necessarily lengthy feedback.  For instance, I’ve included some examples below of feedback that is short and to-the-point: 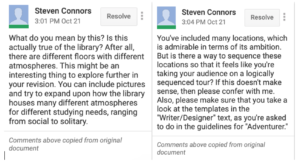 I believe that the examples above serve to show what Harris means when she suggests providing feedback that addresses only a few points.  For instance, these suggestions do not include lower-order concerns, which would distract the students from considering the aspects of multimodality (providing original pictures), audience (organizing their guide as a tour might be sequenced), and the complexity of their subject matter (i.e., in terms of the library’s various atmospheres).  Furthermore, providing less feedback and making sure that it is intelligible to students can help to streamline the synergistic process of teaching and learning that takes place between students and teachers.  Thus, the enterprise of providing effective feedback doesn’t consist primarily of volume but tactical strategy and it’s necessary to consider how things can be simplified and yet remain effective.  This process of calibration is different for each student. Thus, it is always necessary to consider audience—even as the instructor, especially as the instructor. What does the student-audience need? Shouldn’t the focus be placed on the student’s writing process rather than producing an ideal text based on the teacher’s expectations?  Finally, even though it doesn’t show on my examples, I try to remember to tell my students “Good work!”