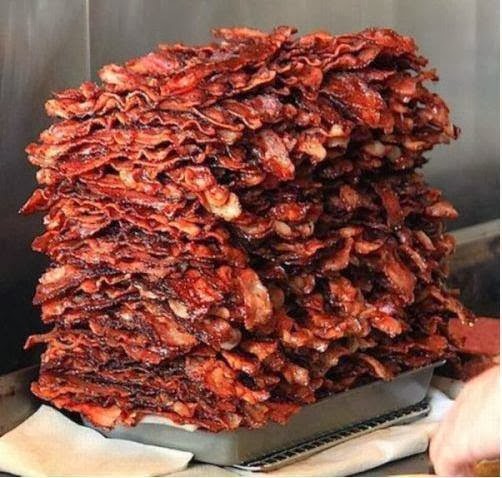 It’s Saturday and I write.  Or at least I attempt to write. But really there is a battle raging in my head now. A battle for my attention and passions. The Food Network Magazine arrived today and the entire issue is dedicated to bacon.

Now I do not eat a lot of bacon, but I do like it, but not the run of the mill Oscar Meyer bacon. I like good thick slab bacon and the type of bacon you buy in pork stores. But I think even more than the taste of bacon is the smell of bacon and the memories it tugs out. There is something reminiscent about the smell of bacon. It reminds me of home. Now don’t get me wrong. I am not saying that I grew up in a house of regular and ritual bacon eaters. We had our share of bagels, lox, and cream cheese.  But there is something about the imaginary image of bacon- its smell wafting up the stairs and sneaking through the cracks of the bedroom door..always up the stairs, never down the hallway of a ranch house. The smell of that bacon penetrating through the sleep and bringing one to consciousness with a smile and a rumble in the stomach anticipating the morning breakfast, and the laughing, and the affectionate ruffling of the hair as mom and dad tinkered in the kitchen.Maybe that scene existed, but not in my kitchen. Still, the smell of bacon still does that and I like to cook it. I have always been a traditionalist when it comes to bacon, so I am fascinated by the culture’s addiction to bacon and the fan clubs that have evolved around it. Bacon had hit the mainstream. Bacon bumper stickers, clothes, bandages, hats. Seriously, bacon is a culture with its own Facebook page. Ah a bacon passionate affinity space. Gee (2011) would be so proud. So because I am not quite sure I understand the culture of bacon, I am finding myself drawn to the recipes for bacon candy, and chocolate bacon, and bacon frosting. And I want to cook and try things out. I want to play with the memory of bacon and the reality of the food. It is a problem as I contemplate my problem statement. I negotiate with myself and make a decision. I will divide my time between my two passionate interests now–understanding the minds of adolescent boys and how they form academic identities, and whether or not the population that swears by bacon taffy are daffy.