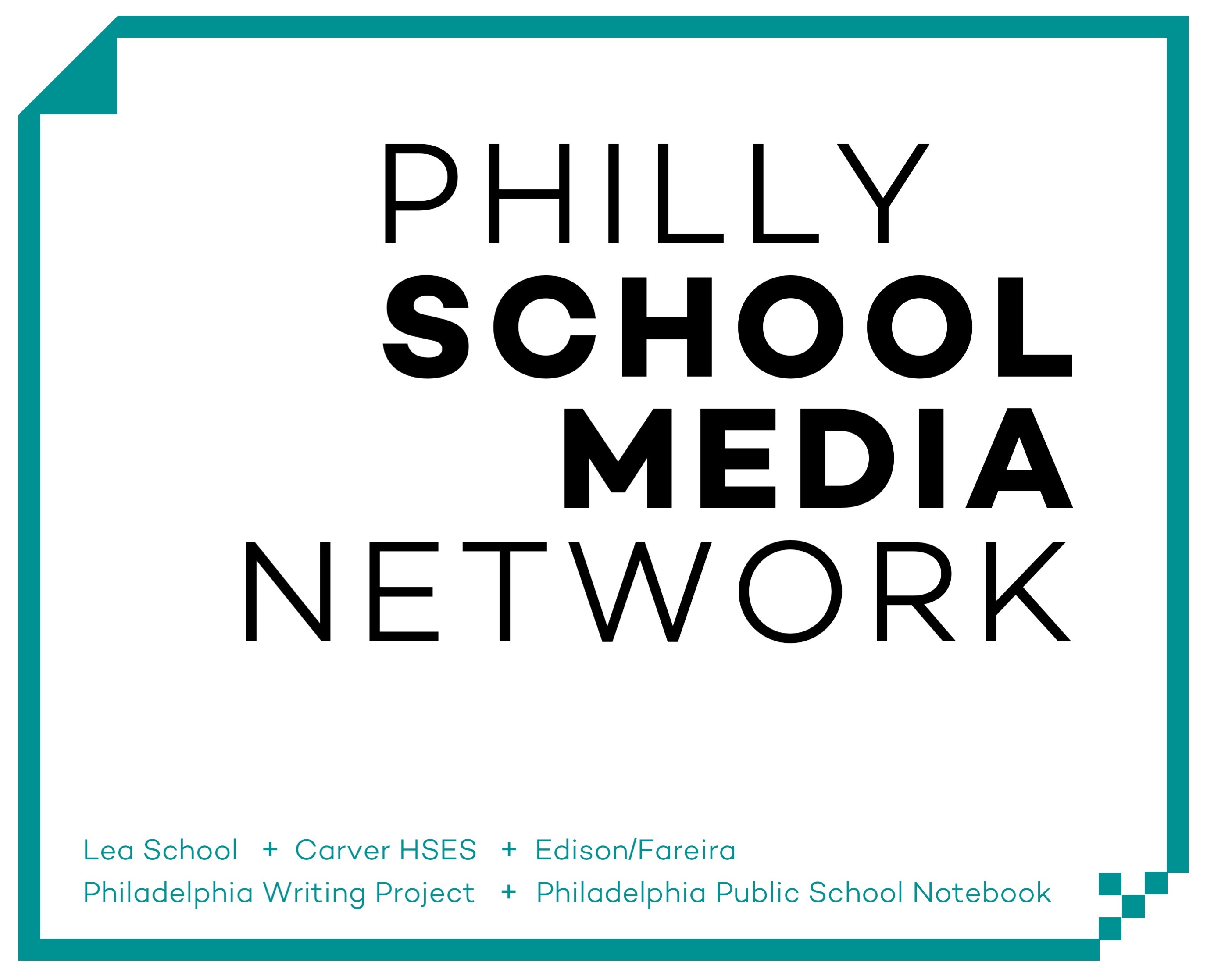 In the summer of 2017, a group of students from two high schools (Carver High School, a STEM focused magnet middle and high school and Edison, a comprehensive neighborhood high school) and one K-8 school (Lea) in Philadelphia, sat with Philadelphia Writing Project (PhilWP) facilitators and journalists from the Public School Notebook (a local paper devoted to education issues in the city) to talk and write about the news. These students explored journalism and identified issues that were important to them. (See the Summer I Facilitator Agenda and their publication.) 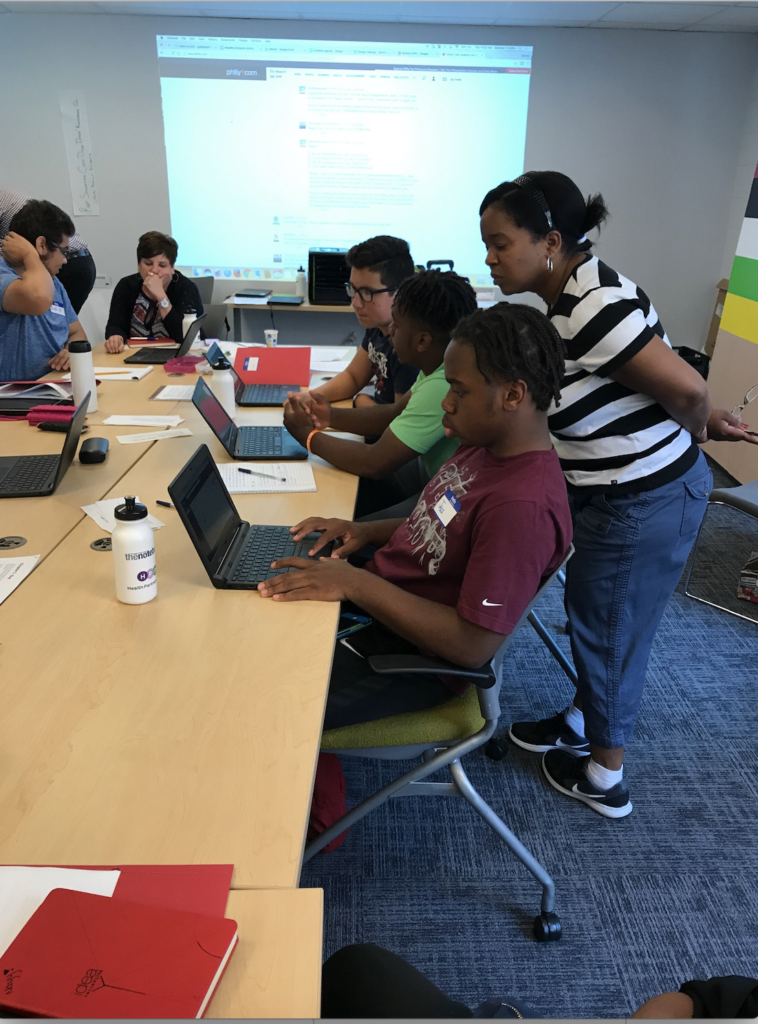 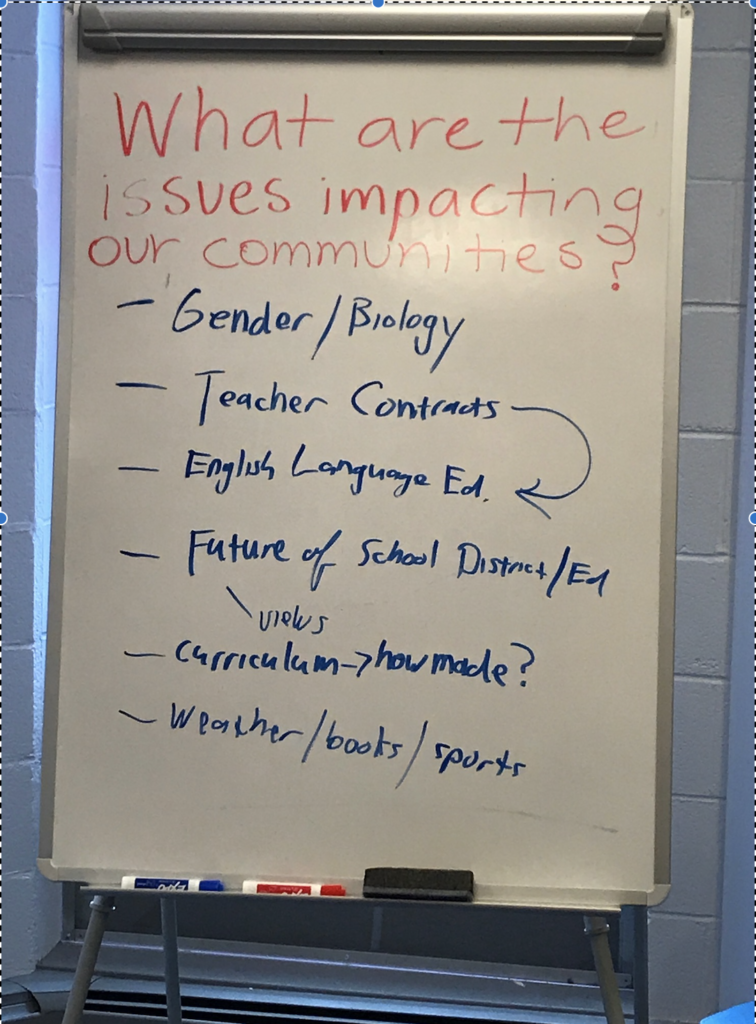 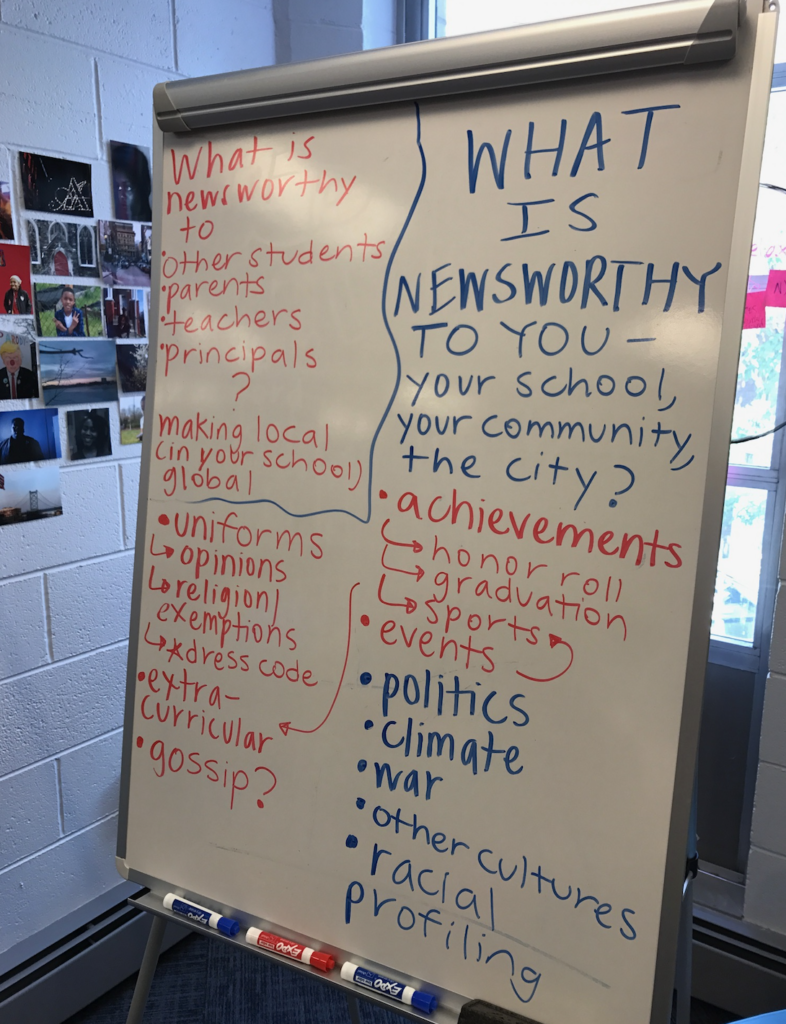 Faced with an onslaught of “fake news” and a plethora of social media, along with the reality that budget cuts and school closings in the last few years have practically wiped out school newspapers in Philadelphia, PhilWP and the Public School Notebook embarked on a project to bring more journalism and news literacy to Philadelphia students. We saw this as a critical piece of work to engage young writers in topics and ideas that were of interest to them that would also encourage research and argument writing. In the political upheaval of the nation (the same year saw the growth of the student movement starting in Parkland, Florida) and the challenges facing the Philadelphia School District, we wanted to support student writers, showing them that their voices could have meaning in their local schools and communities as well as in the larger community of the city.

The Philly School Media Network began in the fall in those three schools. Initially, we worked with NWP teachers experienced in the work of NWP’s College, Career, and Community Writing Program (C3WP). Eventually, one high school was not able to continue, and we added another school, U School, a project-based new high school in Philadelphia.

In the summer of 2018 we had a second Summer Institute for students. The Summer II Agenda shows some changes that we made, and along with journalists from the Public School Notebook, we included other forms of journalism outside of just print media, developing our new partnership with the Pulitzer Center (and Pulitzer Center Education Resources), and PhillyCam. Again, students produced a Summer II 2018 newspaper. In the summer institute 2018, we began to help student do their work outside of traditional text, using audio, for example, which could also be a way to expand the reach of their publications. 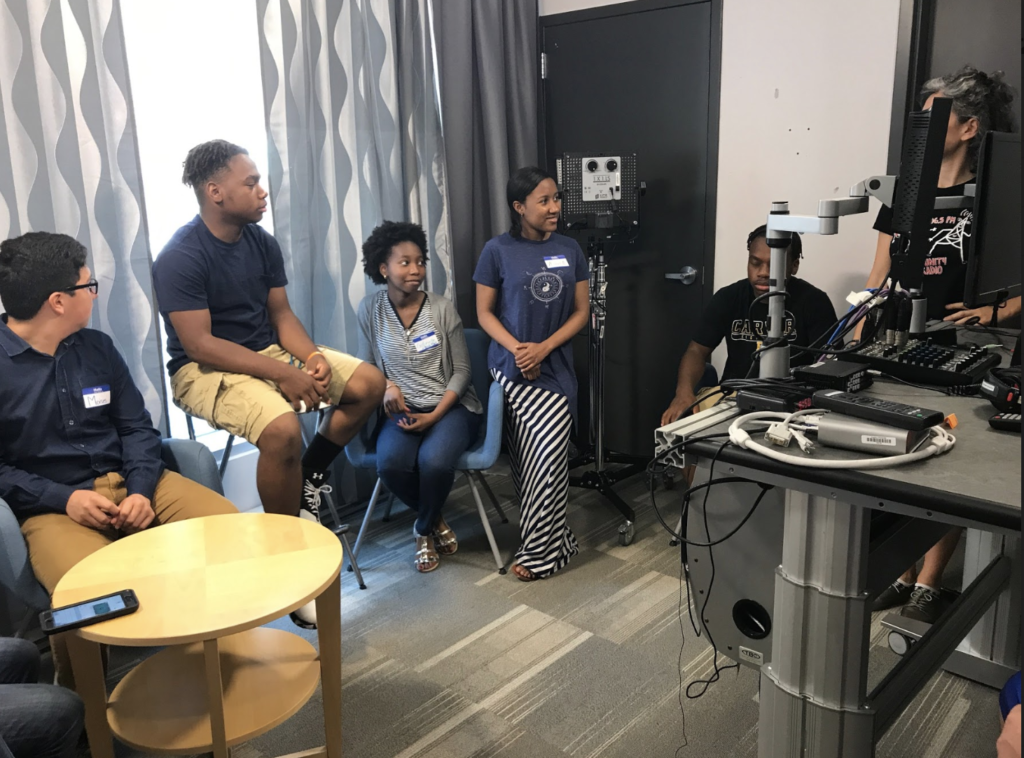 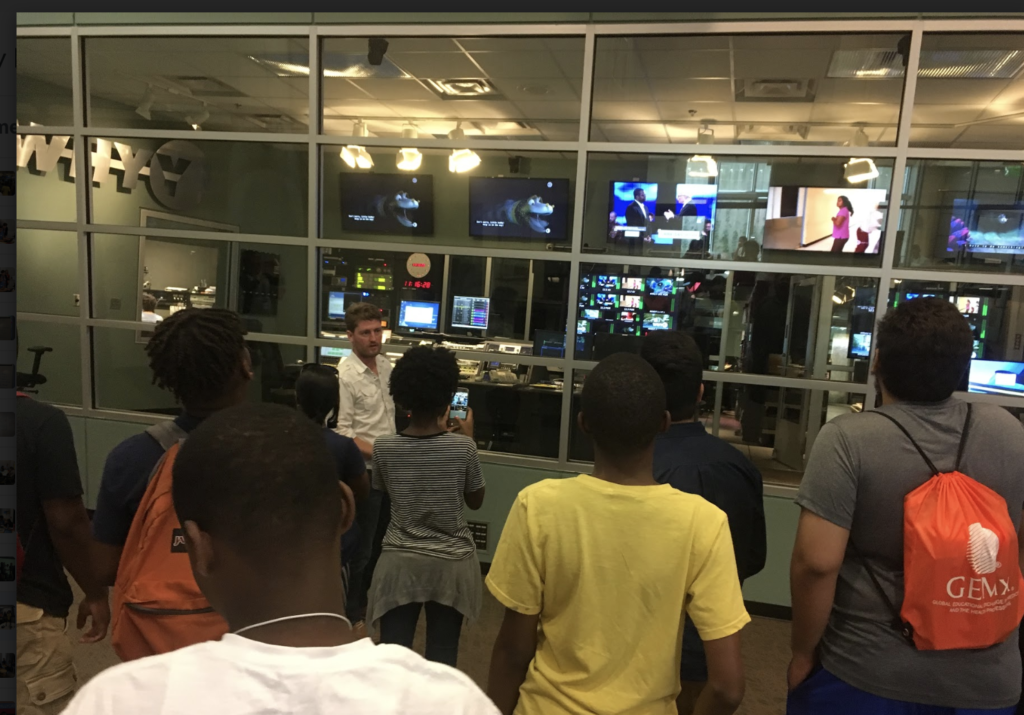 In the second summer, students had experience with producing written texts as well as audio and video with the support of local stations and PhillyCam.

Now that we have completed the first year of the Philly School Media Network, we have seen evidence that students and teachers can become more engaged with writing through journalism.

After the summer institute in 2017, one student commented that: “I can see us creating a newspaper for the students at our school.” Another said: “I see [journalists] changing the world.”

One of these schools, Carver High School for Engineering and Science, started a school newspaper, in print and online, through this project. Their paper, The Carver Times, “was part of a broader push to create space for students to bring more of themselves to school and to create opportunities for greater student voice,” explained Christina Puntel, one of the teachers, along with Geoff Winkur, who worked with Carver students. More than anything else, writing for the Times has changed the way students relate to their teachers and school community. “What stood out to Geoff  and I about the paper is that it was a place where they were both teaching us, and teaching the larger school community, and then learning as well,” says Puntel. “They see themselves as writers, and as really important to the fabric of the school, as newsmakers and as writers. It’s been really special.” Based on the success of the paper this past year, Puntel will teach a new journalism class in 2018-19. 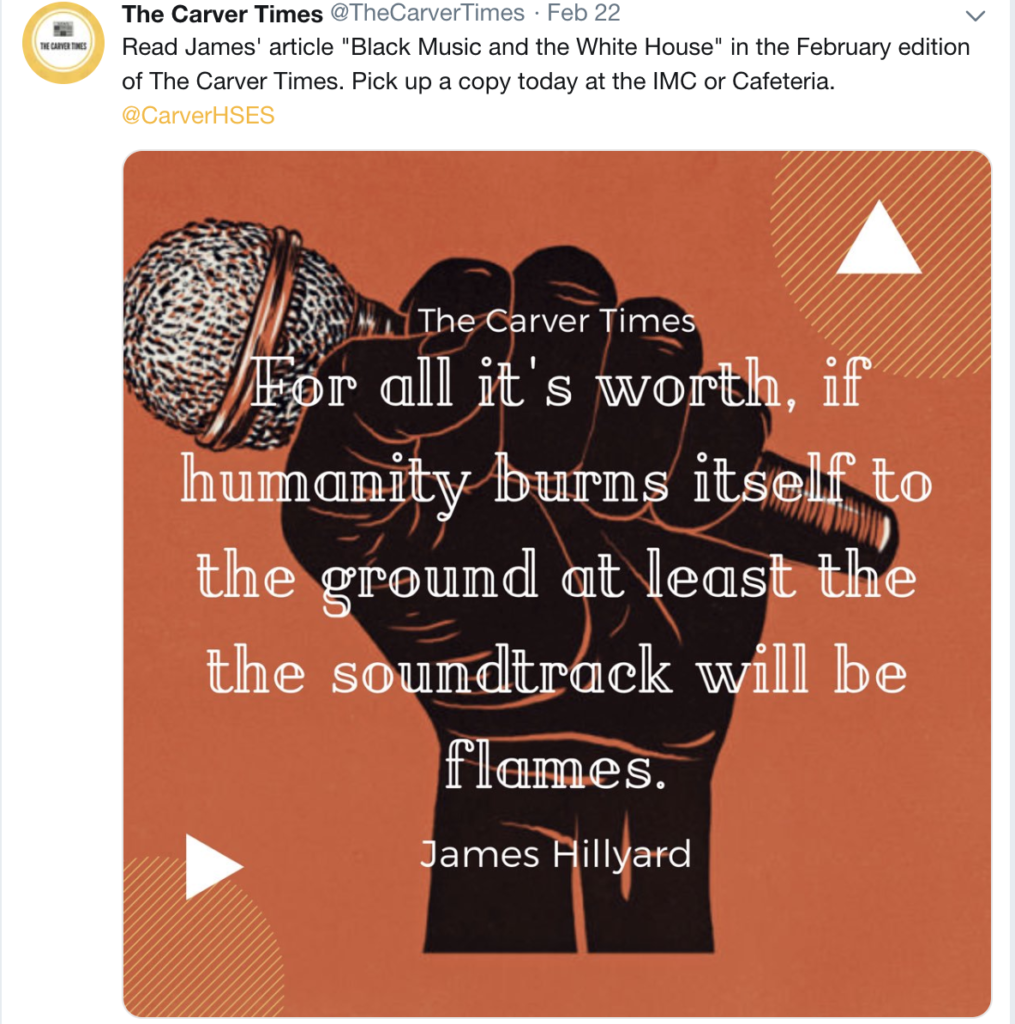 The Carver Times used Twitter to advertise their articles and publications. 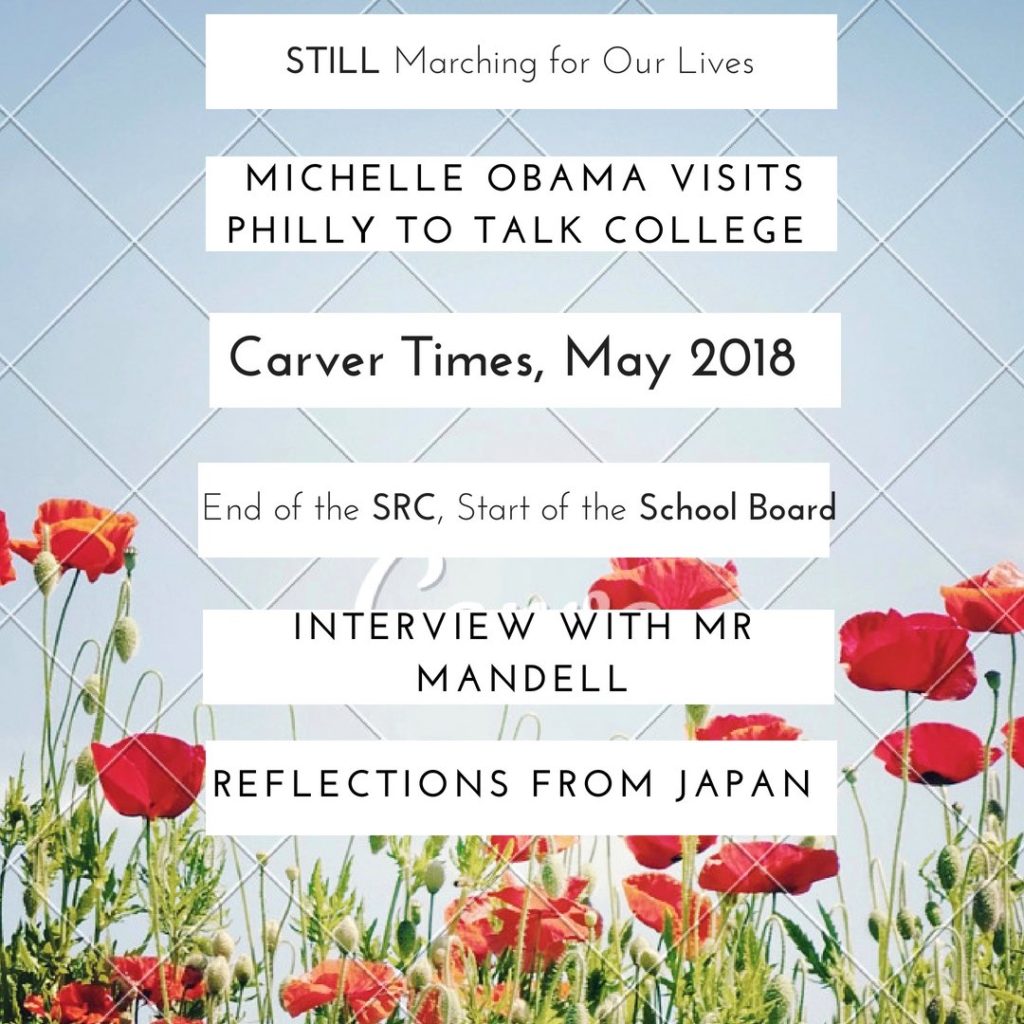 At all of the schools there were some important features about this program that inevitably led to students developing their commitment to writing:

One of the key aspects of this year’s project was the partnerships that we began to build. The most significant of these was the partnership with the Public School Notebook, which provided resources, journalists, and a platform for publication of student writing. We also began to build connections with the News Literacy Project and the Pulitzer Center. These partnerships, along with enhancing the journalistic resources available to teachers and students, also helped to broaden students’ perspectives through developing  relationships outside of their immediate school and community.

The Challenges of building a School Media Network

As we look back on this first year of the Philly School Media Network, along with many successes and student publications (see links for these), we realized that this work, in the current environment, also had multiple challenges that we hope we can all learn from.

Challenge #1: Each of these schools had to find a way to incorporate journalism into their school day and into their classes. Given tight schedules and some required curriculum, this was a challenge.  At Lea, the teacher explored journalistic writing in her 7th grade ELA curriculum. At U School, one teacher worked with a graduate student from The Graduate School of Education at the University of Pennsylvania and shared his student writing with us. At Carver, two teachers met with students, along with PhilWP TC Dina Portnoy, one day a week during the three lunch periods. Their first published piece, Wearing Coates, appeared in the Public School Notebook. Eventually, they published a newspaper, The Carver Times, in print, and the Carver Times online. These are also available as PDFs: Carver Times December 2017, Carver Times January 2018, Carver Times March 2018,  Carver Times April 2018, Carver Times May 2018. After the success of this publication, the Carver principal assigned one of the teachers a journalism course, a multi-grade elective for the 2018-2019 school year.

Challenge #2: We saw this project as a way to increase students’ understanding of research as part of their writing, encouraging them to seek evidence from multiple sources, to learn the skills required for interviewing knowledgeable people, and to be careful and discerning about information. Young people (like the rest of us) are sometimes more interested in sharing their thoughts and feelings. In other words, some of their writing was actually commentary. That was certainly an important area for their writing, but we were often unsure about whether or not we were able to incorporate real media literacy and skills into our work with students. We believed that this work with students was deeply connected to what the Writing Project talks about as “Civic Writing.”  This writing has a “personal and civic dimension,” but helping students make the connections between these and understand how their research, reporting, and commentary can play a role in the larger community, or have agency in that community, is still work that we need to pursue.

Challenge #3: Although our summer institutes for students were well worth doing, we were not able to do the kind of work that would have been most helpful with teachers, which could have included a summer institute and meetings during the year to share ideas and student writing as well as develop a range of materials, resources, lessons, and strategies for journalism. Sustaining this work with students during the school year requires that teachers are invested in developing this work in schools and knowledgeable about the ways in which they can support students. We understand from this experience that there are some key programmatic features which are necessary in order to sustain and build the work with students. In particular, this includes supporting teachers who will work with students during the school day, during  classroom instruction as well as at lunchtime and after school. As Writing Project teachers, we are well aware of the importance of teachers working together; nevertheless, our focus on engaging students with this grant and the limitations of funding meant that we missed this key feature of the work.  With this in mind, a teachers’ institute and ongoing professional development led by participating teachers is essential.

We did, however, share some resources for teachers, even if we didn’t find a way to build teachers’ capacity to develop and implement these resources.

Challenge #4: We developed a series of terrific partnerships: the Public School Notebook, the News Literacy Project (and Checkology and the SIFT archive, newsletter on news/media literacy), WHYY, PhillyCam and the Pulitzer Center (and Pulitzer Center Education Resources). During the year, PhilWP TCs working with the project, some of the teachers at the schools, and members of the Public School Notebook met together almost every two months. Although we developed a Philly School Media Network page on the Public School Notebook site, we were not able to publish as many student pieces as we originally planned. These partnerships need to be evaluated, sustained, and expanded in order to continue this work and develop relationships between students and journalists during the school year.

Challenge #5: We still want to expand the reach of the student voices that we have nurtured, and hopefully will continue to nurture. At Carver, students used Twitter to publicize their work (@TheCarverTimes), and in October of 2018 they began publishing their newspaper using a Google Site for The Carver Times. Near the end of the 2017-2018 year we also established our own website, Philly School Media Network, to share student writing more broadly. Nevertheless, knowing that for students, publishing their work is a critical incentive for continuing to write, we never felt that we sufficiently explored ways to broaden the audience for their work to give them a strong sense of the power of their words and voices.