In July, I opted into my district’s year-long remote program as a kindergarten teacher. My district created this program for families who wanted a safe option for their child during the pandemic. Students would spend about 60 minutes a day on Zoom with a teacher in the remote program then work on asynchronous assignments for the remainder of the school day.  I was very grateful that my district provided this year-long program, but I was worried about creating connections and community with my students when I only saw them for an hour each day over a screen.

To help build community, I committed myself to write letters to my students throughout the school year. I remember how excited I was to receive snail mail in elementary school, and I hoped my students would feel the same way.  I sent my first letter a month into the school year, and I was blown away by the response. Students started to bring their letters to class, ecstatically waving them in front of their Zoom screen to let me know that they received them. Parents also let me know that their child was reading the card every day and carrying it around the house with them.

This positive feedback made me wonder if I could extend letter writing in the form of pen pals between students. In kindergarten, we see a dramatic change in students’ writing. They start the year drawing and labeling pictures with beginning sounds and end the year writing complete sentences. However, the motivation to write sentences is not always there. I hoped that students would be motivated to write to their classmates and build a stronger classroom community.

When I first brought up the idea to parents, I received a very positive response with over 90% wanting to participate (we reached 100% participation by the end of this project). The other remote kindergarten teachers were also interested in this idea, which led to about 75 kindergarteners participating in the pen pal project. Through the Panda Cares grant, I purchased cards and stamps for students in the remote kindergarten program. Each student received 4 cards to write to another student in their class. We wrote the first card together as a class then students wrote the next three cards with help from their families. 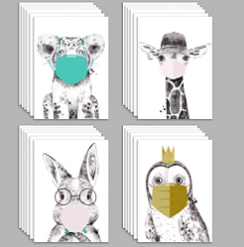 The cards used to write to a pen pal.

On the first day of letter writing the Zoom meeting was buzzing with excitement. Students came to the meeting with their cards ready to go and shared excitedly about who their pen pal was. Over the next couple of weeks, students brought the letters they received to our Zoom meetings and started to share tidbits of information they had learned about their pen pals, like how one of their pen pals had lost a tooth. During small groups one day, a student asked if they could say “hi” to their pen pal, which turned into a very sweet exchange of students shyly saying hi to each other and asking if they can be friends.

The pen pal exchange ended in April, but one of the kindergarten classes decided to extend the project due to the amount of interest that came from students. My coworker assigned each of her students a new pen pal in the class so that they could meet and learn about someone new. I am grateful to Panda Cares for helping me build community within my class while also growing writing skills!