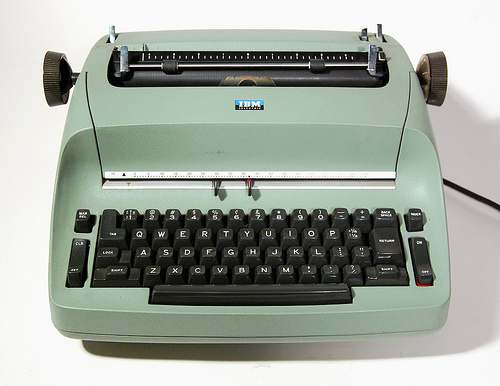 One Teacher's Journey to a New Digital World

I remember the old adage “Back when I was a boy”…and when I heard that, I knew that I was about to get a lesson on how easy I had it when I was young, compared to the difficulties and hardships my parents had.  And years later, I could finally understand the adage. “Back when I was a girl, we only wrote compositions on yellow, fuzzy paper with blurry red lines. We used the Reader’s Guide green books to find resources, often squirreled away in the musty, dusty, stack in dimly lit libraries. Back when I was a girl, we only had typewriters, and those that were lucky, had Selectrics with type face embedded on little metal balls that were quick and neat. We marveled at the speed a paper could be composed. And we were jealous of the people who had them.

Time presses on and the conveniences I enjoyed as a student are archaic and extinct, and any mention of them to my students today are met with “What’s a type writer?” But instead of pining for the lost conveniences of my youth, I embrace the conveniences that today’s students have and continue to engage in practices that utilize them to strengthen and build the education my students receive. This didnt just happen overnight. A series of events let to my realization that the education I was delivering to my students belonged in the “Back when I was a girl” time frame. I noticed that students were happy, excited, and motivated when they had their technology open and they were sharing and looking at pictures, and movies, and music montages in the cafeteria before the bell rang. And then, not fifteen minutes later, they were stonefaced in the classroom. And once, running late, I told the kids to hurry up and get on line. Confused, one little boy said,”Wait, if you want us to hurry, why are you telling us to get online?” And then I realized that to the online meant the internet, and to me, on line, meant line up. What a disconnect. And suddenly, the whole idea of language as a social construct, and communiites of practice made more than theoretical sense. Here it was being shouted out and living, embodied in the world of real-school.

So it was time to do something. It was time for me to go to school. And I do not mean the typical get up, and get in the car to go to school. I mean it was time to go to school to learn how to “be” in school, to learn how to stop being the “back when I was a girl teacher,” to learn, to become, as Prensky (2001) coined it, a digital immigrant.  I didn’t have to take a trip to the embassy to get a visa. I did not have to apply for a passport. I simply had to open my mind and allow my comfort zone of pedagogy and methodology to move over to make some room for some new thinking, and some new practices

I have a 26 month old granddaughter. She is curious, inquisitive, and wants to do ever...
by Sheila Cooperman
See All Posts
Collection