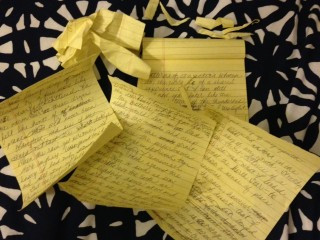 [This is part of a larger conversation I have been having with Kevin Hodgson about digital writing and literacies (and which we are archiving at Jog the Web and here on the  National Writing Project Digital Is site in our blog posts.)]

A few weeks ago, Kevin sent me a VoiceThread in which he asked me about online communities, their vibrancy and their exclusiveness. He asked this through a beautiful story about the night sky and an epiphany he had as a child.

Finally, I have responded in kind. I decided to speak less directly about composition in this piece, and instead to respond to the concept of human (dis)connection, be it through whatever medium it presents.

Below I have added notes on the process of making this VoiceThread, which is part podcast, part collage, part page poetry (from college). It was the longest process of composition for a product in this series with Kevin, which has got me thinking about the demands of page and screen composition.

I have been wanting to do a podcast ever since Ryan Trauman posted a little How To Incorporate an Audio Assignment into the Classroom on SoundCloud. After hearing Kevin’s and compounded with my desire to do podcasts…I was intimidated. That and some seriously looming deadlines were the first hurdle of this project (which has me thinking about the possibility that some people may resist writing not for lack of motivation, but because of it). When I finally had a moment to think of my response, I turned to none other than (the once new and revolutionary) trusty ol’ pen and paper.

I wondered why I did that. In other products in this series, I have taken notes and otherwise worked on wording early on in the process of composing, but I didn’t write anything out like I was doing here. This was classic composing including scratching things out and drawing arrows–even crumpling up entire sections that just seemed “wrong.” One part of the process for composing (what resulted in the first slide in the VoiceThread) that was very different from my other page composing processes was that I read and reread sections out loud. After committing another thought, I’d start all over from the beginning in my best speaking voice. It was strange to write this piece. I felt like it meandered along, checking out alleyways and peering through windows around the topic. And yet, I felt it was cohesive. I wondered if that was due to the number of times I had heard it rather than the quality of the content itself. I knew what I didn’t want to do, however. I didn’t want to speak directly to composing after relaying this childhood story. Whenever I tried, I literally lifted my pen off of the page. Kevin had done this smoothly, and I listened again to his composition, but it didn’t want to be written into mine.

In the end, I think reading aloud helped me compose, but I also think it made for a very affected read when it came time to record. I was so tired of reading the piece, that even though I stumbled through a line in the middle, I no longer cared. To record, I used the QuickTime Audio Recording option I have have grown to love through this series. I played some free online music while I read the pages. I should have learned from the first time I tried to play music and talk over it, and applied the music after in iMovie, but lucky for me in playing around with how to crop the photo and the sound together, I clicked on an option to play the sound one octave lower. Suddenly my voice sounded less (annoyingly) dramatic, and the music was far more subtle. Serendipitous mistake.

The rest of the VoiceThread was filled with the spirit of “serendipitous mistakes” I have grown accustomed to in composing digitally. When I was looking for a photo to add to my audio (and found out I couldn’t do that directly), I found the first four photos that follow my “podcast.” I ordered them to show a landscape (my desert home) next to my new cityscape, next to the connections of wires, and a network…all absent humans in an obvious way, but the structures for our connections. Again, this lead to thinking about the link to the Marina Abramovic’s performance piece I ahd witnessed a few years back with a friend, and which he had posted on my Facebook page a few days previous. I had watched it several times, entranced by the obvious time travel the two of them take as they look at each other 30 years after parting. And then she reaches for him.

I wanted the context for this piece to be present before people viewed it. So I quickly used KeepVid to download the YouTube clip, said attribution for its source as I did an Audio Recording on QuickTime, tossed both of those in iMovie (and toned down my voice while there).

I then wanted to go to community, because that was at the heart of Kevin’s question, but which I had not directly addressed. I went back to photos and came up short. I clicked on every picture that looked interesting to me, and realized that most pictures of online communication were negative, as is a lot of talk about it. When I saw the picture of the person tangled in cords–one cord sticking out of the mouth as if that is the new way to connect–it made me think of a piece I wrote right after college, maybe a few years later, during a time when the connection IRL (in real life) was more disconnected than many current complaints about our digital worlds. In it there is similarly an image painted in word of a (dis)connection felt in person as if it is streaming across a cord. Sure enough, with just a click to my search bar, I found the poem over a decade old. I even found the three versions of it I have created over the years–each with their own linebreaks and spacing. Again, I marveled at digital composition. I could not have time traveled so easily, and so quickly, if I had to go to the dusty boxes in my storage unit to find fading copies of the poem. I may not have even remembered its existence tonight if I had not been reminded of it by the title listed in ever-growing folder in my computer drive. I had found my ending. Again, not a direct path from thesis to conclusion, but an argument all the same. I’d love to hear what argument you heard, as you meandered through.