My Favorite Memory is...

As I prepared for this event I wanted to capture something significant in the lives of the students I work with as well as reflect on the year like no other we had. I decided to center my writing night on a a favorite memory of the last year to celebrate the survival of distance learning. I wanted the craft paired with the writing to also signify something important during this year, when I found the laptop craft I knew it was perfect. Minutes before the event I felt nervous, something unusual for me when talking to a large number of people. I thought about the statistics I included regarding COVID-19 and hoped it would not bring a negative energy to the writing night. As families started to join they were very eager to respond to the ice-breaker question I posted. It immediately calmed me down. After sharing the responses students started to wave at me, I felt like myself again. It was just in time because my next slide was my introduction. After introducing myself, I loved hearing the students introduce themselves. Some parents were willing to introduce themselves and it was also very delightful to hear them be part of the conversation. When the statistics when on screen I could see the shocked faces of the parents on camera, but also agreeing nods when I shared the positives that have happened. Following, the participants were asked about a favorite memory of the last year and I what the responded was something I did not expect. In breakout rooms the participants shared their memory, and hearing the memories as well as seeing the responses was surreal. One student shared how seeing her grandparents for the first time in over a year was her favorite memory, and all the faces on the screen smiled and sadly nodded in agreement. It was like everyone was agreeing to what it felt like to see someone so special for the first time after not being able to physically see them in person and hug them. Another student shared her favorite memory was playing in the snow after the snowstorm with both of her parents because they could not and did not go to work. There were so many that shared how memorable that was for them. The number of memories and the amount of significance they had was something I did not imagine the students would share and write about. Afterwards, the participants made their laptop craft and attached it to their writing and they loved having their own laptop. Many said they would love to use the laptop for their stuffed animals to be able to have their own device. After all participants shared, there were final remarks and thank you was said by all parties. It was an event that I would not have planned in a different way! 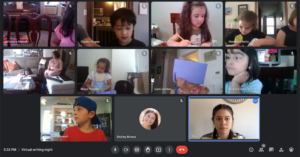