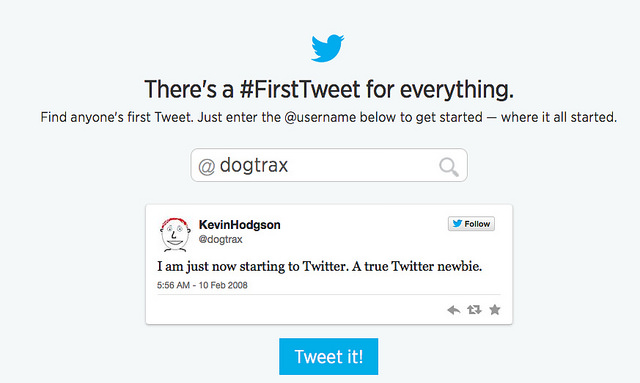 Looking Back at the First Tweet, and Six Years of Tweeting

But 31,000 tweet later as @dogtrax (I know? What the heck do I write about? I don’t know), I am still wondering how to push the boundaries of the 140 characters. I write 25 word stories, tinker with hashtags, collaborate across the world, make memes, take part in Twitter chats, share with others and steal from others (and remix what others are stealing from others). My professional development will never be the same. It’s an odd thing, this Twitter.

I started to use Twitter in 2008 a few months after a National Writing Project gathering in Amherst, where Bud Hunt (aka @budtheteacher) chatted over dinner one night about this thing called Twitter, and he wasn’t quite sure of all the possibilities and potentials for writers, but he was pretty confident it was not a flash-in-the-pan kind of technology. He grappled to explain it to us, and we grappled to understand. 140 characters? A stream of tweets? What the heck is he talking about?

As usual, Bud pointed us in the right direction. I started tweeting and haven’t stopped (see this post from 2008 that collects my first few tweets.) It’s true that not everyone cares or should care about what I post, but every now and then, something clicks and connects — some ideas that suddenly transforms your view of the world or your view of teaching or your kids, or technology — and in that moment, the power of Twitter is suddenly exposed. You do have to get through a lot of LOL Cats to get there but …. you know … it’s worth it.

Not long after I started on Twitter, I composed this poem:

I dream in Twitter
in 140 characters
that cut off my thoughts before they are complete
and then I wonder, why 140?
Ten more letters would serve me right
as I write about what I am doing at that moment
in time,
connecting across the world with so many others
shackled by 140 characters, too,
and I remain amazed at how deep the brevity can be.

I find it unsettling to eavesdrop on conversations
between two
when you can only read one
and it startles me to think that someone else out there
has put their ear to my words
and wondered the same about me.
Whose eyes are watching?

Twitter is both an expanding universe
of tentacles and hyperlinks that draw you in
with knowledge and experience
and a shrinking neighborhood of similar voices,
echoing out your name
in comfortable silence.

I dream in Twitter
in 140 characters,
and that is what I am doing
right
at
this
moment.

Then later, I wrote and recorded this song:

I get up in the morning and I twitter all my dreams
140 characters is just enough for me
Then, each moment of the day becomes a Twitter storm
until the world is at my doorstep and everyone belongs
to

I’m reading all my friends — the ones I haven’t met
from all across the globe, it’s a safety net
We’re putting pressure on Iran — let the China wall fall
let the information flow so we can all crawl
inside