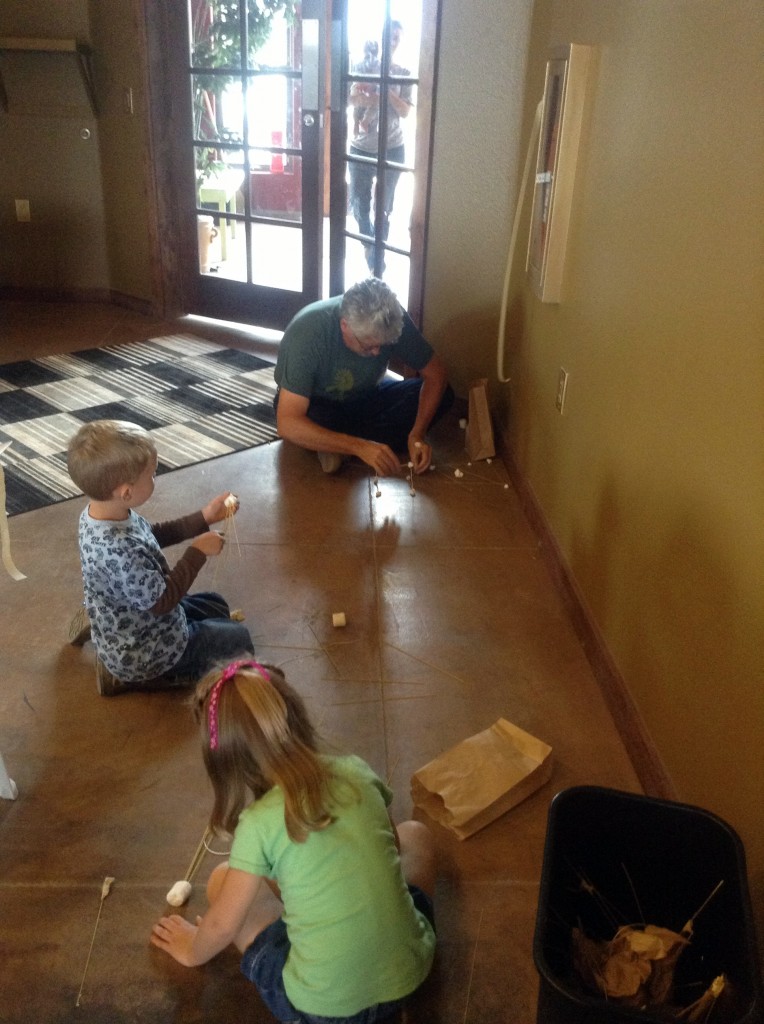 For the last few year’s, I’ve been helping put together a local kids maker day. This year’s event, influenced in part by CLMOOC,  was last weekend. It was a great success. The planned program is shown here.

When we hold this annual local event, we never know how many kids will come or what ages they will be. This year we started with about 10 kids. The youngest was 4 months (!….accompanied by a parent and several older siblings) and the oldest was 10. Over the course of the day, some of the younger kids left and others joined in.

We began with making name tags and having the kids introduce themselves to each other and then to the group. The kids typically hate having to do “public” introductions, and this year was no exception. Still, I think that doing this has long term value, and I even think it helped build relationships for the rest of the day. (Several of the kids didn’t know each other before.)

Then we moved on to the Marshmallow Challenge. I’d have to say this was the highlight of the day. Kids just loved it! Several adults even participated, and one of my favorite parts was when a parent has built a tower and as a child approached, she shouted, “Don’t bump it!”

We teamed kids in groups of 2 or 3, trying to mix ages and separate siblings and friends where it made sense. Every team who participated built a successful tower, and we learned lesson about collaboration, play, trying different things, iteration, and design under constraints.

After one round of the building with the formal rules, the kids wanted to do another round with new rules. These are the revised rules we came up with as a group:

Again, each group was successful in building a tower; some were taller than the previous round and some shorter. I think kids could have gone on with this all day, but other activities were calling!

We’d planned to do storytelling next, but altered our plans. At that point in the day, about half of the kids seemed too young to do the activity we’d planned, and several others had said they’d leave if we did storytelling. I hate to give in to demands and really wanted to do storytelling, but also wanted to have a successful day. I put it aside for the moment and hoped we’d return to it later (which we didn’t…this was one of the “failures” of the day. Comments? Advice?)

Instead, we went to the Cardboard Challenge. I’d planned for this to be one of the optional activities in the afternoon, but in looking at the group, I knew that everyone would want to do it. We have very little guidance other than “build something with cardboard,” and all the kids immediately came up with something they wanted to build. We ended up with a monster mask, a cat play house, a puppy house, an egg money collection box, a storage box, a ship, and a giant turtle.

After lunch, a few middle school students came in to teach us how to make duct tape wallets. What fun! The main instructor for this was a natural teacher/mentor. He gave just enough instructions and was so patient with even the littlest kids. He was flexible and acknowledged when someone came up with a good alternative way to do something. Just what you want in a teacher! Everyone ended up with wallets to take home.

Next up was jewelry making. While there were several options, the kids gravitated to the rainbow loom work with colored rubber bands. We didn’t buy the actual plastic loom, because we’d found these instructions for weaving with your fingers. This was a great activity. I think it worked particularly well with smaller kids (down to 4) and with kids who sometimes had a hard time focusing or persisting otherwise. There are some lessons there, I think.

We wrapped the day up with cooking. I’ve always wanted to do this, and when our facility added a kitchen this year, I was thrilled. We had a six year old teach us how to make biscuits, and he was awesome! So were the biscuits. It was fun for me to just hang back in the background and watch (and worry about the oven…nothing bad happened, of course). Afterwards, we ate biscuits with homemade jam and shared the leftovers with the adults. (There was a parallel adult-focused event taking place in the same building.)

Overall, it was a great day. Here are some observations and thoughts for next year:

flickr photo shared by octaviosn under a C...
by Kevin Hodgson
See All Posts
Collection