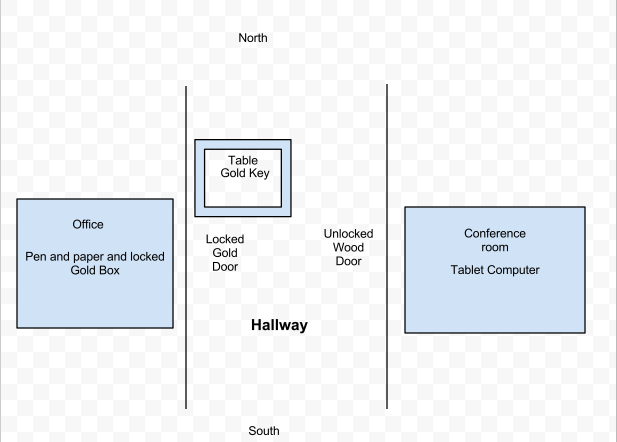 The other day, I came across Jason Seller’s post about Interactive Fiction and became intrigued. This week, I dove in and wrote about my adventures as I sought to play with various IF possibilities and thought about how this kind of writing might have a place in my sixth grade classroom.

Day one: I had Jason’s Digital Is post in mind as I began composing an Interactive Fiction story at PlayFic, a site that Jason used with his students. It was challenging, to say the least. In this post, I sought to shine a light on the thinking that was going on, and and the struggles I was having. To say this kind of writing was very different from other kinds of story writing would be an understatement. I had to think, and write, differently. This is the map that I created to help me “see” my story and navigate through the setting.

Day two: I shared out the story that I had written and published at Playfic. The story is called What to Write with When You are Writing. It’s not that complex, but to read/play it, you need to know the language of the platform. This post helped guide readers into the story and offered up some words that could be the map for exploration. Day three: Thanks to suggestions and comments from some readers (including Chad Sansing), I ventured another direction with a free software program called Twine. Although still in the realm of Interactive Fiction, Twine allows you to create stories with hypertext, so that the reader makes choices. So, it was very different from using Playfic but was just as interesting. This post explains what I discovered, and also links to a story I wrote and published with Twine called Here There Everywhere.

Day four: My last post brought together the various resources and links I had been bookmarking along the way as I sought to share out my thinking. If you have your own resources, please add them as a comment so I can add your ideas to my collection.