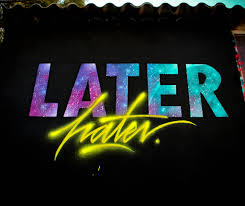 How 'The Little Hater' Interrupts Your Teaching

I would like to introduce you to one of my favorite voices out there Jay Smooth. In this video, which is part of a series of videos, he elaborates upon what he calls the “Little Hater.”  The Little Hater is the voice, mostly inside your head, though can be heard from numerous agents in our life, often blocks us from being our most creative. It makes us question ourselves. Is this up to par? Does it really make sense? In this episode, Jay Smooth talks about his current challenge: balancing interest and intrigue with having “something to say.”

I have to say that I am also facing the same dilemma when I think about how to create curricula for students that serves pathways for engagement and messing around, while placing opportunities for students to think critically and challenge ideas. I’m currently working on a proposal for my hometown to create a summer technology program that will ask youth to explore creative media production, web design, and computer programming, while simultaneously seeking to foster community engagement around critical issues and advocate around breaking the digital divide. It’s a lot to think about and questions often emerge: Is this project really just a big facade for what you would like to say? Aren’t there more important things (street violence, ‘concrete’ skills,etc.) that deserve more atttention than youth understanding computers?  How long are you even dedicated to this mission? Don’t you need to be worrying about getting a job? All these things come together to put up a blockade around my enthusiasm about getting this project up off the ground.

In general, when it comes to digital literacy and multimodality, there are often “little hater” style ideas that infiltrate the emergence of technology in the classroom.  Are you just doing this because it’s more fun?  Aren’t you just creating a new generation of stimulation junkies that can’t sit still for more than 5 seconds? ”You know, the more technology we have, the more impersonal society becomes…”  “I could see this done in an afterschool program, but I don’t understand what’s so significant about these digital tools to become a core principle.”  What’s most important about the Little Hater is that these permeate through my mind as I contemplate my committment to seeing the rise and validation of new technologies and textual forms within schools—specifically disadvantaged, underfunded, and overburdened schools.

In the end, I take inspiration from Jay Smooth when he says “I’ll still think it’s worth it to get in the ring.”  That means looking at new ways to approach the goal.  Catching up on research on how to effectively blend digital tools into existing school curriculums. Bookmarking news reports that mention how many future jobs will open that are in need of tech-friendly workers and colleges who are taking their programs online. Tying back the potential of new tools to community possibilities and improvements.

As an educator, how have you faced ‘The Little Hater’?

This Iridescent Classroom video was created by Ira Socol for use by an Albemarle C...
by Pamela Moran

Time to let the dragons rest

Lately, my students and I have been talking a lot about a new game. Here's...
by Chad Sansing

This Iridescent Classroom video was created by Ira Socol for use by an Albemarle C...
by Pamela Moran
See All Posts
Collection