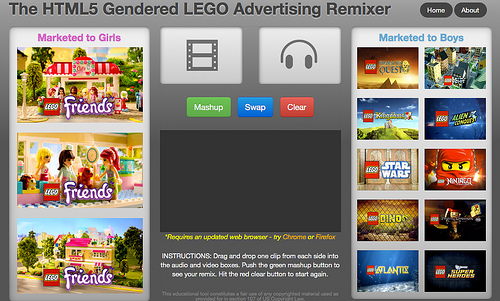 (This is from my blog, Kevin’s Meandering Mind)

I’ve shared this Lego Gender Remix site before but it is so powerful in what it does that it is always worth sharing out again. I used this site yesterday in my class of sixth graders as we begin diving into the concepts of our Digital Life unit, in which we explore technology and media from a variety of angles. Talking to 11 year olds about the permanence of the web and technology … it’s an eye-opening experience for many of them.

One of the many angles we explore is advertising and gender stereotyping (a term which is relatively unfamiliar to them and which leads to a long discussion about cultural values placed on gender). If you spend time with the Lego Remixer site, you’ll see why it is so powerful for this conversation. By mixing the media of a “boys’ commercial” with the media of a “girls’ commercial,” you can deconstruct the stereotypes embedded in the advertising.

It’s a real eye-opener for many of my students when we do this, and in one of my classes, it led to a long discussion about the design of aisles in toy stores (the few that are left in existence). The girls’ aisle? All dolls and filly pink dresses and unicorns and horses. The boys? Guns and vehicles and action heroes.

“You know,” one of my astute girls observed, “if we saw a boy walking down the girls’ aisle at the toy store, we’d probably make a judgment about them. We’d look at them funny.”

Another piped in. “But if a girl is in the boys’ aisle, no one cares,” he added, and the room went silent as we thought about that. No one disagreed with those assumptions.

We talked about avatars, which was the main hub of our lesson, and how people represent or misrepresent themselves in online spaces. I asked my students why they think a boy might use a girl avatar or vice versa. More quiet thinking.

“In some gaming sites,” said one boy, “girls are not always welcomed. Maybe a girl would want a boy avatar so they can just play and not get harassed.”

No one took exception to that insight — that girls are treated differently in gaming sites that they visit. But when I asked if girls are as good gamers as boys, everyone agreed that gender does not connect with gaming skills.

So, I asked, why are girls treated different? More quiet.

“I think it’s because some sites are like clubs for boys,” a girl suggested,” and they think they own the world. They don’t like having girls in the club.”

“Or,” suggested another girl, ” they don’t like that girls being better than them at the game.”

Some of you know that I teach a video game design unit, and I do try to pay attention to these gender issues. It’s not a boy-centric unit of learning, yet I do find I have to be attentive to supporting and elevating the girls to a certain confidence level. Many girls seem apt to cede the expertise to the boys, and I work against that tide.

When I showcase student-created games as exemplars, I make sure the girls get slightly more equal footing than the boys. I ask girls who have figured out “workarounds” to share that knowledge and insight with the class. I don’t ignore the boys, but I pay attention to the girls a little bit more in our gaming unit. I have never heard any of my boys speak down to girls when we do gaming. But I am not naive, either. I know it happens in the spaces where I don’t go and that the adult world simmers with these inequities.

Look at this quote from Anita Sarkeesian, who is the heart of #Gamergate.

“The notion that gaming was not for women rippled out into society, until we heard it not just from the games industry, but from our families, teachers and friends. As a consequence, I, like many women, had a complicated, love-hate relationship with gaming culture.” from New York Times

What is very obvious each year is this insight as a teacher: my girls often design and build and publish more engaging games than my boys do. Ok, so I am generalizing a bit and maybe stereotyping my kids, but it’s true. (Note to self: document this during this year’s project?) The girls often design their video games with rich storytelling, where the game play informs the storytelling (the while premise of our game design unit). The boys go for the rapid fire action, the shooting avatars, the survival of the protagonist. Their stories are often the weakest element of their projects.

My challenge as a teacher is to do my best to remove those walls and have girls and boys share the best of what they bring to the table, so that we can all learn together as a community of many, not a group of two genders. I can’t take it for granted that gender issues do not exist as a wedge in the world of gaming and beyond. It does. I just need to be cognizant of this reality, and make sure girls are not just invited into the party, but are front and center alongside the boys at all times.

The Marginal Syllabus: (re)Marking on Equity in Education

So, this is interesting … coming o...
by Kevin Hodgson

Why we need a #techquity conversation

Why is it that when young people use technology on adult...
by Joe Dillon

The Marginal Syllabus: (re)Marking on Equity in Education

So, this is interesting … coming o...
by Kevin Hodgson
See All Posts
Collection