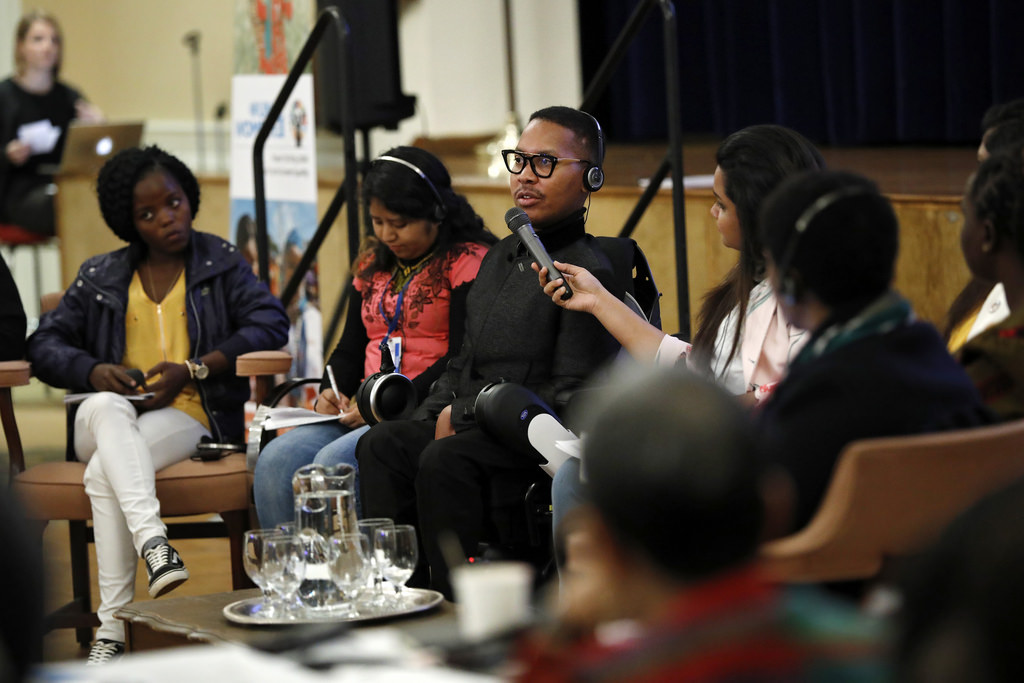 I had a suspicion I’d won when the students made eye contact with me as they walked back in the room. I remember hearing in a crime movie that if the jury returns and doesn’t look at the defendant, a guilty plea is coming. Their bright-eyed looks in my direction suggested victory, but I was still surprised when they officially announced it. A true win in my teaching career!

What did I win? Well, a water bottle and a New York City Writing Project tote bag, but also a “Shark Tank” style experience at an Assignment Matters New York City Writing Project professional development day. Assignment Matters is an initiative from the National Writing Project that develops the use of Literacy Design Collaborative tools and the professional expertise of teachers. It is focused on helping teachers improve their major writing assignments, also known as culminating tasks, to make them more rigorous and purposeful.

For the Shark Tank event, one of the teacher liaisons had arranged for three of her brilliant students to be a jury for teachers’ culminating tasks. For the Shark Tank participating teachers had to present their task to the student panel or “jury.” The student jury then posed a series of questions to the teacher to determine the specifics of the assignment. Each assignment would be judged for the task the students thought was the best and the one they would most like to be assigned. They were not an easy audience. Their questions were probing and important.

I presented my culminating task related to a 10th grade ELA American Dream unit; students had to write a personal argumentative essay in response to the question, “Is the American Dream truly attainable for all Americans?” The journey related to my creation of this assignment represents the importance of professional community in teaching, as well as the significant impact Assignments Matter has had on my teaching work.

My initial task asked students to write about whether the American Dream was still possible, using “A Raisin in the Sun” by Lorraine Hansberry as a source for the argument. Although this did pass the first test of an effective task- students could argue diverse responses- it required some change around text selection. I needed to bring in additional culturally responsive texts, and I also needed to make the students bring in more texts on their own, to ensure that their argument was authentic. I added in the text “Between the World and Me” by Ta-Nehisi Coates and an expectation of their own researched articles.

The development of my task was then further influenced by a meeting I led with my Writing Project teachers. We examined the New York Times article “The Soul Crushing Student Essay” together, regarding allowing students to use “I” and a personal perspective in their writing. We had a productive conversation that really challenged my notions, and this conversation caused me to reshape my assignment. As a result I asked students to answer the question “Is the American Dream truly attainable for all Americans?” using their own identity and future plans, and the stories of their family members, along with the unit texts and researched texts. Giving students a personal stake in the assignment made them more likely to develop their argument in a nuanced and unique manner, as well as develop their concept of the world and their place within it.

Despite the ways in which my assignment evolved I was skeptical of presenting my work to a panel of students, and my apprehension grew as the Shark Tank preparation began. Teachers from other schools were planning to present culminating tasks around the creation of award-winning rap songs about geometry, about moving poetry slams, about physically enacting the water cycle from the perspective of a droplet; my prosaic assignment regarding the American Dream seemed a designated loser.

My colleagues and I discussed how to make it more alluring. The high school students needed more than writing prompts; they should have an opportunity to air their written, researched ideas and experience conflict. Also, my younger (cooler) colleague and I realized we needed to include a text with some cultural cachet to the unit. We added in the Childish Gambino music video “This is America” to lend some controversial fresh ideas to the whole endeavor. Before presenting I scrambled to revise my assignment to include an end-of-unit-seminar examining the message of the music video as it related to the students’ personal perspective on the American Dream.

When I presented this task to the intimidating student panel, one of them said, “There’s going to be some conflict when you talk about this. How are you going to handle it?” My response was: “I welcome it. Students should be able to engage in seminars with conflict and bring their evidence, ideas, and a respectful, inquiring spirit to that conversational space. Conflict is an opportunity.” From the students’ faces when I said this, I could tell I had struck a chord. When they presented me the award they mentioned how they liked this aspect of the assignment and my response.

I hope teachers also bring that curious spirit to conversations about culminating tasks, student work, and student thinking. My work with the Assignment Matters team at the National Writing Project has shown me how transformative (and victorious!) those discussions can be.

For the past two years, I’ve worked...
by Benjamin Koch

Giving us a level playing field

For the past two years, I’ve worked...
by Benjamin Koch
See All Posts
Collection