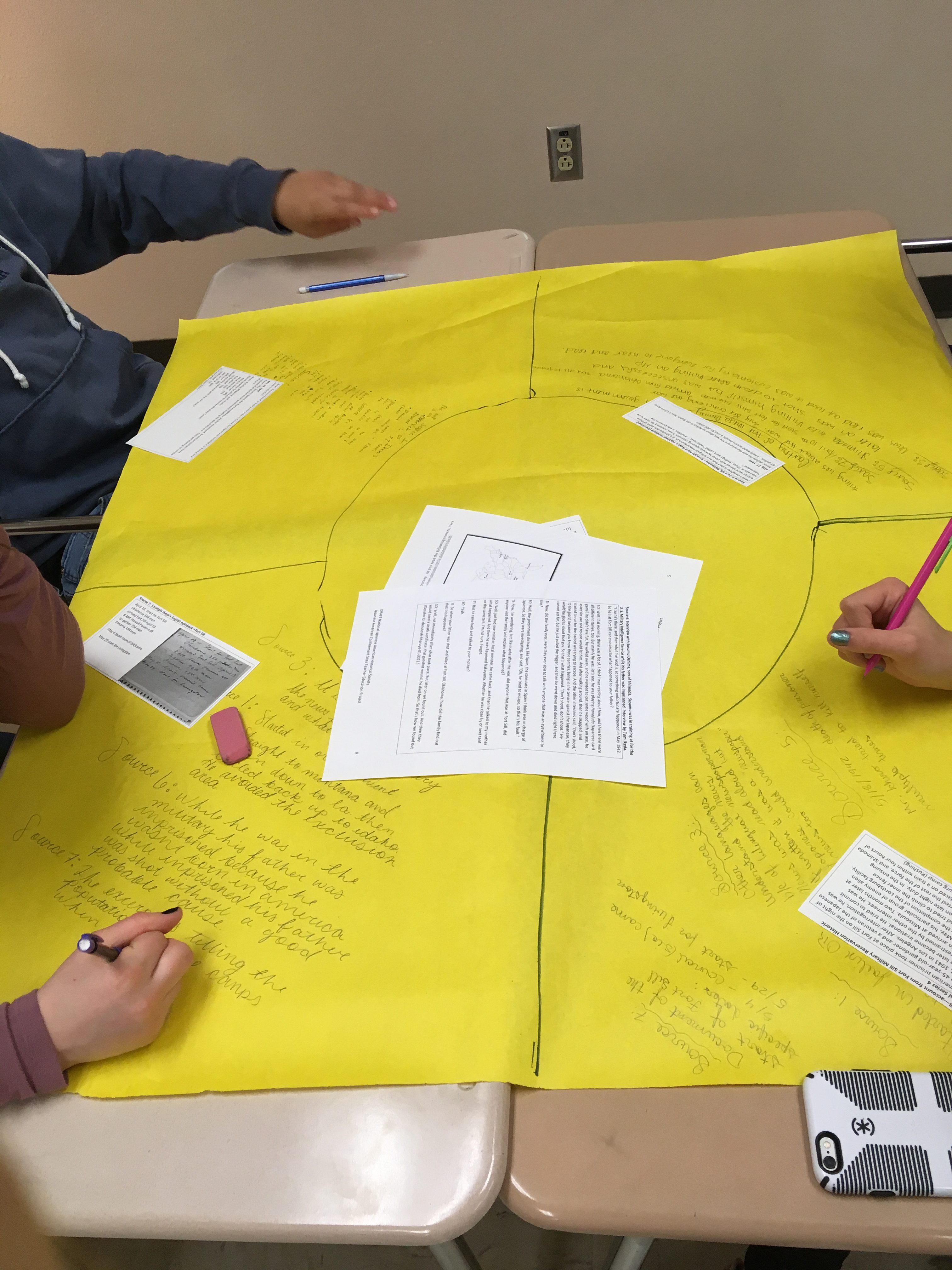 At 6:00 pm on December 7, 1941, there was a knock on the door of our family apartment in Portland, Oregon.  Two men stood there and told my father, Kaiji Ikeya that he was to go with them.   He then put on his coat and hat and left with the two men without telling my mom.  We did not hear from him or know where he was for about a month.  When we finally learned about my dad’s whereabouts, I went to visit him in the Multnomah County jail.  I was still in high school.  The memory of my dad behind bars in jail and his last words are seared in my mind.  He told me to take good care of myself and that we might never see each other again. I never did.

This inquiry lesson explored the little known story of the Department of Justice imprisonment of the Japanese community leaders arrested throughout the U. S. It is different from the West Coast mass incarceration set in motion by President Franklin D. Roosevelt signing Executive Order 9066 on February 19, 1942. The curriculum is a story of a decade of a program of government surveillance of the Japanese American community, and U.S. decisions based on rumor and informants that resulted to the imprisonment of the Japanese community leaders—priests, businessmen, Japanese language school teachers, and martial arts teachers. It is a story of the denial of citizenship based on race and prejudice to immigrants who had lived in the US for over thirty years. It led to displacement and family separation. It paved the road for the mass incarceration of 120,000 people of Japanese ancestry from the West Coast. 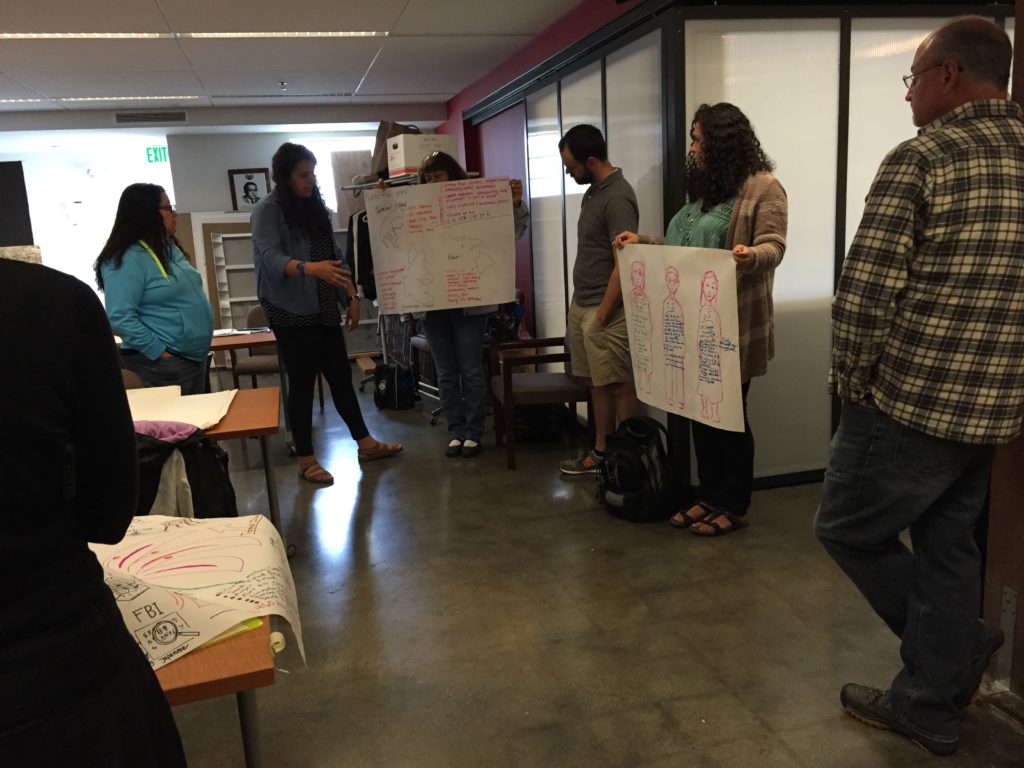 Lindsey Little from the Kitsap Tribal School explaining a graphic organizer at the Seattle workshop.

The Department of Justice history of World War II arrests is a hidden history. This significant and relevant historical event is not in high school textbooks. The Bay Area Writing Project through the National Writing Project/National Park Service grant funded teachers who attended workshops across the country to participate in a six-month study group to share how they fit the curriculum in their social studies classroom. Six teachers from different schools and districts in New Mexico, Washington, and California participated.

It didn’t seem possible that teachers who didn’t know each other would be able to share their work, their challenges, and thinking without ever seeing each other face-to-face. Honestly, I didn’t know how the study group would turn out, but it turned out well. It could be that teachers self selected themselves for the study group. It could be that their participation in the workshops established a level of trust with one of the facilitators of the group. It could be that one of the teachers, Lindsey Little from Kitsap Tribal School in Washington, volunteered to co-facilitate. With her pulse on what was happening with her students, teachers were able to support each and made a safe place for teacher talk. The online platform Zoom made it all possible. One teacher Marti Gutierrez from Albuquerque zoomed in from her car while waiting for daughter at cheerleading practice. 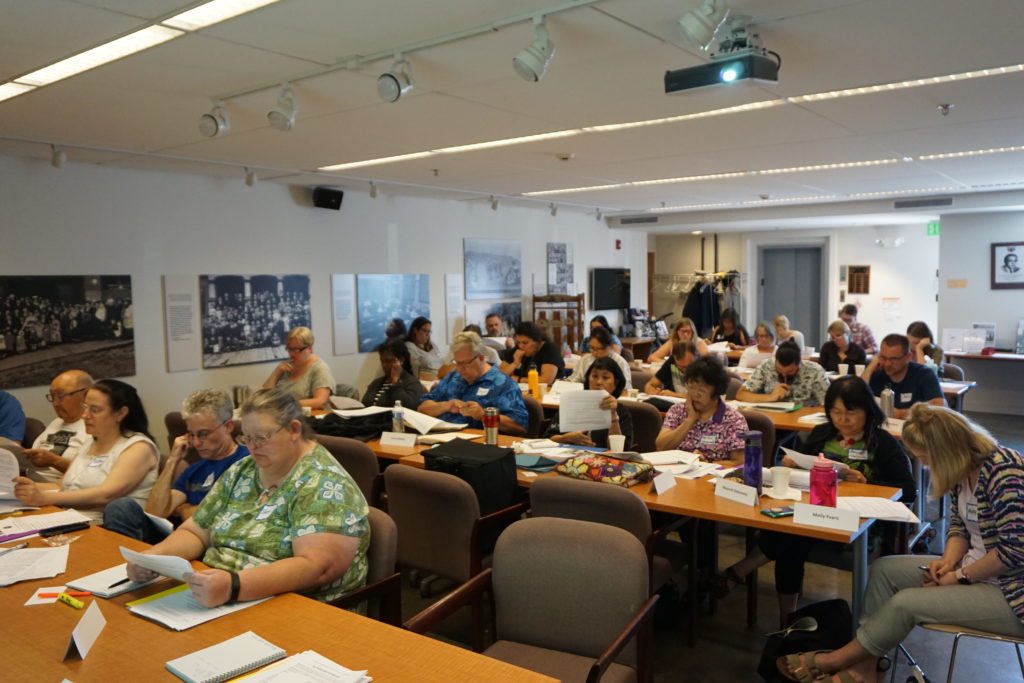 Using Zoom the teachers were able to share how they implemented the curriculum, asked questions, shared student work, and how the curriculum and strategies they learned transferred to studying similar historical events especially those regarding the struggle for justice and human rights. Richard Kaz found the curriculum to be an easy fit into his already developed unit on the Japanese incarceration. Craig Townsend tried to fit it in a unit on World War II which had focused on the war abroad and found that it didn’t work in that unit. Danielle Guernea used the poetry lesson as a theater piece embellishing it with information from the case studies. Lindsey used the curriculum in a unit about resistance following a case study about Gordon Hirabayashi. Marti Gutierrez found it was perfect for her Humanities classroom. Marti wrote:

It was some of the best professional development I have ever received. I learned great strategies that could be applied across content but also emphasized ways to teach the story of Japanese Americans during and after WWII. The online study group also spent a great deal of time discussing teaching social justice, tolerance, and reaching out to our most marginalized students.

The curriculum can be accessed at https://www.njahs.org/wwii-doj-japanese-internment-curriculum/

As We Continue: Opening the Walls of the Classroom and the Boundaries of the Park
by Christina Cantrill