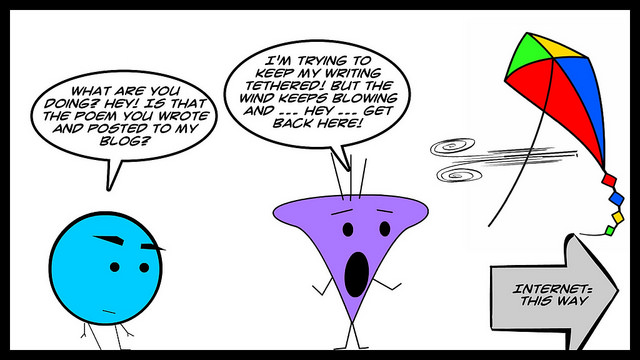 (This first appeared at my blog: Kevin’s Meandering Mind. Feel free to do with it what you want.)

I’ve been having an interesting backchannel discussion about digital writing with some friends of mine, whose opinions I greatly respect. An issue in our discussions arose around the idea of curating writing that has been posted in one site on the Web and whether or not the writer needs to grant approval for someone else to curate that writing into another digital space. (There’s a slight twist here, in that the topic that sparked this conversation concerns inviting specific people to write for a specific site for a specific reason.)

On one hand, I think the argument that a writer should have some say over where and when their writing is re-used once it is published makes sense. They wrote it. It’s their ideas. They took the time to craft it into something worth curating. They created something.

Therefore, I think that if you publish it as a digital text, you have to be aware that someone else might find what you write interesting and useful, and the might just pull it into some sort of curation, either for personal saving (like Diigo, for example) or for community sharing (like via a retweet, or a Scoop.it magazine, or Flipboard). I might email a story to you, or recommend one via our social networking. I wrote about a similar topic with the automated paper.li curation that is built on algorithms. (I don’t know where that post ended up, but I hope it found a home somewhere nice.)

This ability to curate and be curated doesn’t mean that someone has permission to scrape your content off a website and put out there elsewhere as if it were their own. That’s theft. That’s not what I am talking about (although digital spaces does make that easier than ever to do).

What I mean is that while we — the writer — might put some writing at a certain website, such as this blog or that digital space over there, someone else might come along and pull what we made into another project via RSS or hyperlink or some other format, and the writing moves onward.

Or, as Cory Doctorow wrote in his book — Information Doesn’t Want to Be Free — thatI recently reviewed here in this space (maybe you curated it or bookmarked it?), we can think of content that we create (writing, media, etc.) as a dandelion in its puffy seed phase, casting ideas to the wind with hope that something will catch root somewhere, in some time. If you write it, someone may read it. You just won’t necessarily know when and where your writing will find its reader.

You need faith — faith that your writing can withstand the sharing world. Faith that your ideas can travel and still have impact. Faith that the digital world is not taking away from the writing experience, but adding to the potential: of audience, of medium, of impact.

It’s complicated and frustrating and liberating, too — this idea of ownership with digital writing. Sites put up paywalls, I know. Others use technology that resist copying or sharing. I’m all for Creative Commons designations. None of this seems to really matter, though. The writing moves on at its own pace, in some form or another.

I find myself coming more down on the side of “let the ideas go free as much as possible” than the side of  “keep the writing tethered to the extent possible.”  I know that makes a lot of writers uncomfortable. It may be that those writers will avoid the digital spaces, and hope that the dandelion seeds still take root somewhere.

Me? I’m one of those fools who takes a deep breath and sends the seeds scattering.

Peace (in the shift),
Kevin

(This is a post for DigiLitSunday, a regular look with other educators at digital literaci...
by Kevin Hodgson

This week's theme for Di...
by Kevin Hodgson

Keynoting and presenting...
by Kevin Hodgson
See All Posts
Collection