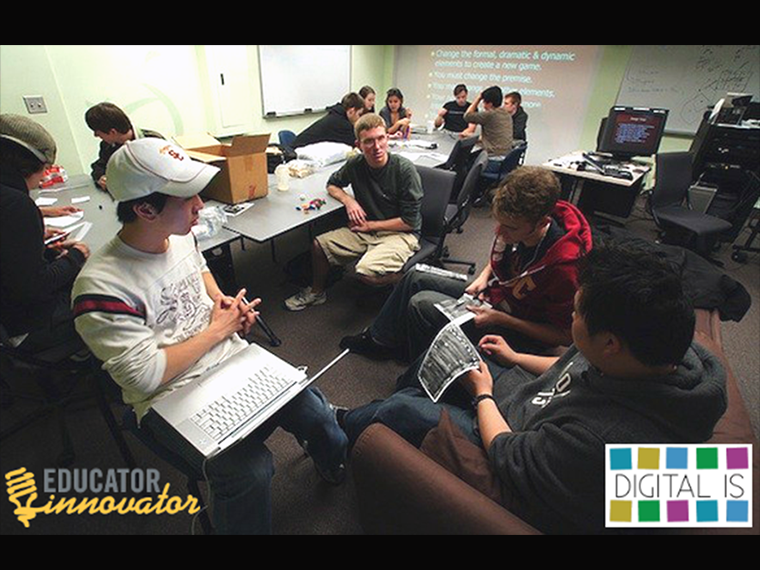 Joe Dillon, 11th grade English teacher and instructional coach at Rangeview High School in Aurora, Colorado, started using social media with his students when “in my second year of teaching, my curiosity was sparked when I noticed they were texting each other in class.” From the beginning, Dillon was in the habit of walking around the classroom, asking his students questions about their reading and writing. “I was trying to honor informal reading and writing at the same time that there were finally enough kids with cell phones for them to start pinging each other during class.” Instead of banning the practice, Dillon became fascinated with the emerging medium for “informal reading and writing.” Dillon recalls, “I was lucky to receive an internal district grant, be curious, and also find some early success with allowing students to make wikis. The idea was to encourage production-centered learning – which is central to teaching writing, of course – around their own authentic experiences.”

At the time, Dillon was working with the Denver Writing Project, which, he says, “helped me scratch a lot of my intellectual itches about how to help young writers and how to be the best literacy teacher I could be. The Denver Writing Project connected him with the National Writing Project and connected learning principles. Dillon took on the role of “literacy coach” and district technology coordinator where “many of the questions that teachers posed to me were about technology and less about pedagogy because they were curious about the possibilities.” The MOOC experimentation that the National Writing Project engages every year also fascinated and informed Dillon’s explorations of connected learning in the classroom. He also started engaging with the problem of “techquity” – access to the new technologies to those who can’t afford smartphones or broadband. “I had an equity bent as I looked for material. I found many writers in the connected learning networks who were writing about the intersection of technology and equity.”

Another theme Dillon picked up from online networks was the idea of “being something of an ethnographer in your own class as you try to study the way students develop as readers and writers.” He cited Yetta Goodman’s Kidwatching as one of his guides to studying students in order to teach them more effectively. In his first year teaching, Dillon wanted to use a revision protocol that had students reading each other’s pieces and reflecting on them – peer-supported writing. “At some point I realized I was spending way too much time at the copymachine, so I checked out the school’s cart of little personal organizers, known then as Personal Digital Assistants (PDAs). “They predated netbooks. When I got the whole class working on sharing their writing and reflections with PDAs, I didn’t spend so much time with the copy machine. Then, in the first fifteen minutes of using them, all the PDAs made beeping noises when students shared their writing. All of a sudden, everybody had everyone’s copy of their papers in their hands. They were so dazzled by the way they could see each other’s writing that the room got silent except for the beeps. I remember trying to process what had just happened. That sparked my interest in further exploring the collaborative nature of the web, which of course turned out to be superior to PDAs beaming locally using Bluethooth.”

Dillon secured grants that allowed his classes to have one-to-one netbooks, which enabled them to start using discussion boards, “which had a similar effect to the PDAs in terms of engagement.” Then he introduced wikis: “The day I showed them how to embed a YouTube video in a wiki page, the seventh grade kind of screeched to a halt as they dived into it.” Through the National Writing Project, Dillon started to collaborate with a teacher in New York who taught his class in a similar way: “I had been using wikis with seventh and eighth graders and he had been using Google sites with eighth graders. At the end of the year we both had these 400 page, really messy microcosms of the Internet that we were able to sort and search for all the work our students had done that year. Sometimes we had students make work public and sometimes they kept it private, but was fascinated me was the way we were able to really compare our practices.”

Through the National Writing Project, Dillon found the work of Karen Fasimpaur, who was organizing P2PU’s School of Education. Then he became involved in the NWP’s Making Learning Connected, “ a collaborative, knowledge-building and sharing experience, open to anyone who’s interested in making, creativity, and learning. As we design and then engage in makes that tap into our personal (and professional) interests, share what we’ve done with the Making Learning Connected community, learn from each others’ experiences, and reflect on our own growth, we’ll be agents in the recursive creation and re-creation of this experience we’re describing as a Massively Open Online Collaboration (MOOC).” The MOOC was a partnership between NWP and Mozilla, in which different teachers from different writing projects came together to communicate and think about connected learning. “We decided to organize it in terms of open-ended opportunities for people to network and also do production-centered, interest-powered work on their own in order to understand its potential implications for classrooms. In subsequent years, we onboarded partners to further distribute the facilitation of the MOOC, branching our from our core group.” The online networks he had become increasingly involved in led Joe to work on the intersection between educational technology and equity. He noted the work of Antero Garcia, Nicole Mirra, and Craig Watkins. “On Twitter I noted that we needed a hashtag about the intersection of educational technology and equity issues. Because I had this network from the wring project and others affiliated with our MOOC work, I quickly had a few respondents tell me that my first hashtag was too large, so we should shorten it.” Hence “techquity.” Dillon met Remi Holden at a local ed tech event, who brought research into learning science together with the conversation that had been starting around techquity. Dillon began curating Techquity work on a Google Doc.