John Cage predicated in 1937 that the “entire field of sound” would become available in the future and that the old ways of writing (music, in this case) would no longer be sufficient for supporting or containing that content.

Here he shares about the composition of music:

I believe that the use of noise … to make music (… organization of sound) … will continue and increase until we reach a music produced through the aid of electrical instruments … which will make available for musical purposes any and all sounds that can be heard. … The present methods of writing music … will be inadequate for the composer who will be faced with the entire field of sound.

“The Future of Music: Credo” from Silence  (note: formatting removed)

As in 1937, when Cage was encouraging his community to think about what it meant to write music and organize sound into compositions, today’s new technologies continue to make entire fields of content available and require us all to continue to rethink the ways in which we write, organize, and compose. In the midst of web 2.0 access to content and new audiences, are the more traditional methods of writing and composing adequate? In tackling this question, teachers of the National Writing Project and their students share with us of what they’ve learned as they rethink their own writing and composing practices.

Take Renee Webster’s work in Hearing Student Voices, for example. Recognizing the smart thinking she heard happening in her first grade classroom when children engaged with one another around books and writing, she knew how important it was for them to hear themselves. Hearing themselves helped the students recognize their own “smarts,” and they could then reflect on their work and, when ready, share it with others. With the aid of accessible and easy-to-use digital audio equipment (and her own careful support and scaffolding), Webster was able to inspire her young learners to listen, notice their words, and start to compose in multiple ways. And, as they began to understand themselves as composers and authors, they learned to engage independently in organizing their work and their words in order to share their thoughts with the larger world.

Similarly, high school teacher Dawn Reed in Voice and Composition engaged her students in using new digital audio technologies to their work in speech class to consider a wider audience. First having envisioned the recordings as a means of scaffolding the work in preparing a speech, they all quickly realized the power of editing and publishing their “This I Believe” speeches as podcasted compositions themselves. Reed writes,

“Students said they revised in new ways when they podcasted. They also found that they tried to portray speaking personalities in which they worked on emphasis and tone in their writing to convey their message. Take Lisa’s speech on her belief in laughter. In her piece, voice is present in her print text, but becomes even more sincere and heartfelt through the manner in which she shares her story … . Moreover, Lisa’s classmate shared a closing piece to her speech and while doing so, she accidently laughed, which may at first seem merely cute, but it offers a natural reiteration of the message of Lisa’s “This I Believe” speech. As such, this laugh was left in intentionally by Lisa in order to emphasis the message through not only her spoken voice, but also that of her peer.”

Joel Malley’s The Digital Writing Workshop gives us a view into his English classroom where students are giving the opportunity to learn techniques of multiple fields to develop their compositions. Joel talks about how the opportunities to work in this way, with some direct instruction, point of need support, as well as multiple tools and mediums available and encouragement to explore, allows students to reach a “flow” in their work as they bring their vision to final form.

Katie McKay demonstrates some of the multiple ways that her students communicate their ideas through composing in multimodal modes by sharing a description of a unit on discrimination she organized and the resulting digital stories by her students. Using a multimodal Voicethread interface herself, Katie talks about important learnings she understood as the teacher, highlighting both visual and textual decisions the students made in composing their work.

For example, in a digital story about young Martin Luther King, Jr.’s life, Katie highlights one of the drawings in particular and says:

“This is one the images that really stands out to me when I watch these movies. If you look here, young Martin’s neck is kind of this candy-cane shape showing he is kind of bent up as he first realizes and understands discrimination … and I love how the simple lines of the mother show her sitting up so straight and rigid, not in a unkind way, but a matter-of-fact way … knowing that it’s time she has this talk with her son … [the] lines here were so simple, yet incredibly effective.”

As Cage rightly predicted, and the students and writing teachers demonstrate here, the opportunities brought forth by electronic (digital) tools require us all to continuously learn and share multiple ways to be effective composers and communicators within growing fields of accessible and shareable ideas, feelings, questions and “sound.” 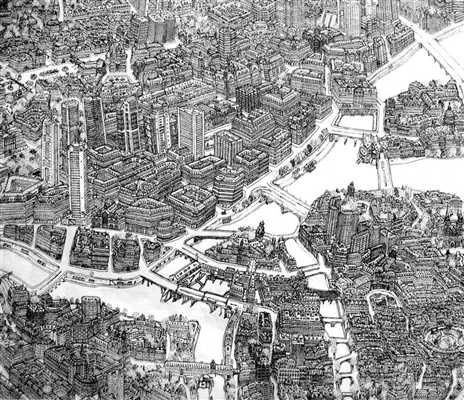 I’ve had a couple of crappy days this week, so when it looked like t...
by Karen LaBonte

Check out this quote from a blog p...
by Kevin Hodgson

This week, while grading Annotated Bibliographies, Pandora did that thing we all love so much where it assumes w...
by Amanda Hedrick
See All Posts
Collection