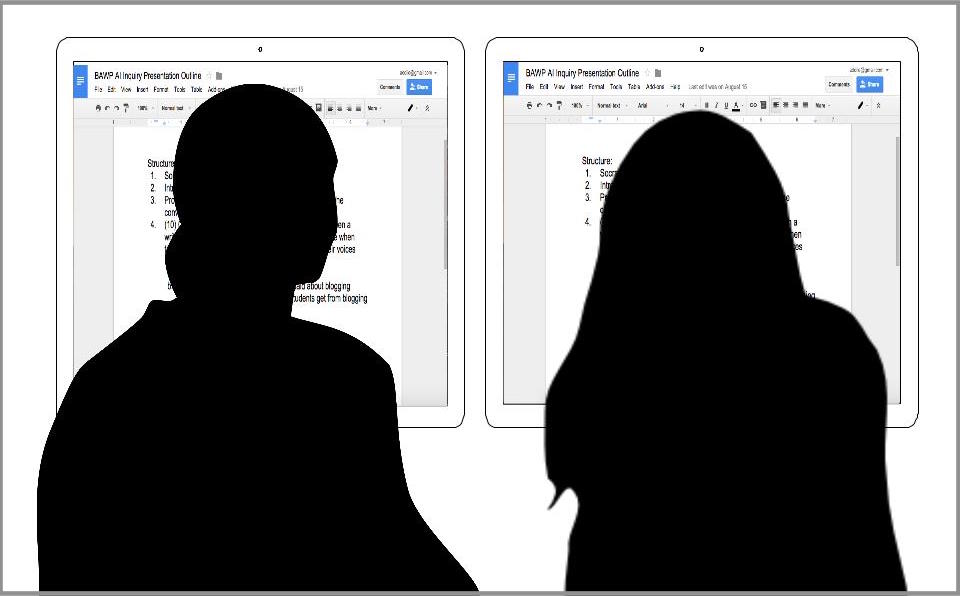 I’ll be honest. I have only played Pokemon Go once or twice, and not even on my own phone.  But I will say that its application of technology illustrates a major concept I want to highlight in my workshop Collaborative Writing 2.0: Learning the Moves Writers Can Make.  It’s that our mobile devices have had GPS and maps for several years now, but in that time, they’ve been used as just that: GPS and maps.  The developers of Pokemon Go have given GPS and Maps a new purpose, so that they are a means to a new end, not the end in and of themselves.  As school districts everywhere immerse their students in digital platforms, teachers of writing must think creatively about practices that harness the unique features of digital tools to help students grow as writers.

My Pokemon Go story started late in my experience with tech, and although I consider myself an early(ish) adopter of Google Apps for Education, first using it in 2008 with my high school students, I hadn’t moved beyond the elementary ways of teaching writing with digital platforms until I saw this “Google Docs & National Novel Writing Month Short Story Challenge” video nearly 6 years later.

As you can see, three professional authors from around the country are working collaboratively in one document to write a short story in one hour.  They are having so much fun writing together, chatting, making decisions about the writing, asking each other questions, essentially doing together what writers usually do individually.  I was inspired, and wondered if this could happen in my classroom, and if so, could it be good for my students?

My mind began making connections immediately about why it could be productive.  I thought about a training on culturally responsive pedagogy in which the facilitator casually told us of how, in many Latino households, knowledge was socially constructed, so in a school setting, it wouldn’t be uncommon for Latino students to naturally huddle around one student’s computer, all looking at the same screen, building understanding together.  Had I been watching a virtual huddling in that video, where multiple voices participated in a process to create and learn together?   And could students raise their critical consciousness about language and power by talking with a partner about the words they used to communicate ideas?

I thought about my summer institute with the Bay Area Writing Project, where discussion about writing was present all the time: we talked about our ideas before writing, talked about the writing itself, we re-read our writing, we talked some more, and on and on.  I realized that if writing is just a form of communication, then constant dialogue through the process is vital to refine our ideas to their most accurate end, and that we need to do this for kids as much as possible.  In the Short Story Challenge, the writers were in constant dialogue, and were an audience for each other as much as they were writers.  What effect might this have?  I had theories to test and answers to learn, so I decided to give it a shot.

In one experiment my students sat side by side, each at a laptop, and in a shared Google Doc collaboratively wrote a paragraph about symbols in Animal Farm.  In another, they drafted individually and then had to synthesize their writing.  In a third, they just organized individual paragraphs in a most logical order to present as an essay.  Those early experiments were my Pokemon Go moments: as much as the writing itself mattered, the digital platform and the product were a means to them constructing knowledge about writing as a process, and about building their identity as writers.

As I walked around my classroom, I noticed that the the writing process remained wholly the same, but speed increased dramatically.  Kids quickly bounced ideas off of each other as they wrote.  They were constantly making choices: One student would make a suggestion, the partner would respond, they would write something down, they would delete it or alter it, and move on to the next. Simultaneously however, the student who was not writing was catching mistakes, suggesting variations to language and word choice.  Writers were filtering ideas through each other and the content was being refined as they developed each sentence, not from one complete rough draft to the next, but from one micro-draft to the next.  There was a constant feedback loop between the two writers and two laptops, inputs and outputs happening without delay, as fast as the human machine and electric machine could process them.

The most rewarding byproduct of this experiment, however, was the talk: this was the first time that I could walk around the classroom and actually hear my students’ thoughts about their writing as they were writing. I could hear them talking about content, style, process, language, grammar and syntax. Partners dialogues about which part of the paragraph they should tackle first and which ideas to include in the paragraph. They also helped each other navigate transition phrases for quotations from the text, choose accurate academic language, and standardize punctuation usage.  All of the conversations were those of writers doing what writers do, and my students were internalizing those choices.  As a teacher of writing, I could be responsive with my instruction based on the conversations my students were having and the knowledge they were building.

With digital platforms and collaborative writing, we can quickly engineer writing playgrounds where the efficiency of the tech and the nature of collaboration actually slows things down, and allows for more careful, although fast-paced, acts of writing.  This is just the beginning.  There is much more to discover about digital collaborative writing, so I invite you to come experience this process on your own, play in the digital playground, evaluate the method, and start your own Pokemon Go story on October 23rd at 1:30pm EST at the #4TDW Conference.

This week's theme for Di...
by Kevin Hodgson

The post first appeared on my blog, All Hands on Deck, at the end of August...
by Karen LaBonte

This week's theme for Di...
by Kevin Hodgson
See All Posts
Collection