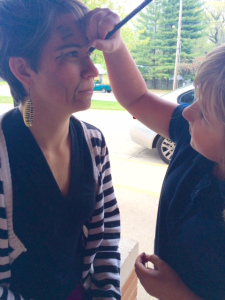 I recently returned from Philadelphia where I had the opportunity to tell the story of Tech Time from my perspective as part of a workshop at the conference of the International Society for Technology in Education (ISTE). I am so grateful that I got to tell this story because it made me examine what themes and lessons I took away from this first year of Tech Time.

This is a story about collaboration and about de-centering technology. Here’s my narrative as I wrote it down for our presentation, which was titled “Creating an After-school Collaborative Space in the Library”:

My name is Miriam Larson and I am a school librarian. I have been program coordinator and school liaison for our school’s community collaboration afterschool program.

This is a story about collaboration. “Tech Time” as we called it, started out as a collaboration between Martin Wolske and Todd Lash. Todd was the librarian at Kenwood until the Spring of 2014 and has since become our technology specialist. I work at Kenwood largely because of Todd. When I met him as I did observations as a first year school librarian, I saw something unique. Todd was willing to advocate for schools and teachers in a way that I had found to be extremely rare. He played a huge part in organizing Kenwood teachers to take on computational thinking as a focus. More importantly, he has helped to build a culture of experimentation and collaboration at Kenwood, two characteristics of a workplace that are essential to an effective learning community.

When Todd moved to a new position as technology instructional coach at Kenwood, I applied for and was hired as the librarian. I took on the grant that Martin and Todd had secured through the Illinois Department of Commerce and Economic Opportunity to be one of several community technology centers with grad students to staff each for 12 hour a week.

Travis Faust was the grad student dedicated to running Tech Time at Kenwood. Travis was responsible for keeping the space open 12 hours a week, reporting out our grant statistics, and helping to develop workshops.

All of us were starting from scratch in the Fall of 2014 and we have learned a lot this year! And as we imagine and plan for next year, I hope that telling you our story will invite you into our brainstorming process because I still have a lot of unanswered questions.

The biggest un-answered question for me is, how do we teach in a way that puts community first instead of centering technology?

I’ll tell you briefly about how our program changed over the course of the year. But then I’d like to focus on my experience with our “girls lead” program, which led to an “aha” moment for me around creating community-centered learning. I also see it as the starting point for where we hope to go with tech time this next school year.

Tech Time started as a three-days-a-week afterschool program and we invited students to bring a note from their parents the same day giving them permission to stay after school. We had very minimal structure, sometimes offering workshops, sometimes having more of an open computer lab space.

Part of what we worked towards was finding language to encourage creative making instead of video game play. Travis would say, “this is still school, we still want you to be learning.” I experimented with language like, “this is a creative space and I know you have lots of ideas in your head, I want to see what you can make!” “If you could change this game, how would you change it?”

We also experimented with structure – should we have project-based workshops or skills-workshops? What if kids were at different levels? We started asking students to begin their tech time by watching at least one tutorial video so they could be increasing their knowledge – this worked pretty well. We experimented with “design documents,” a worksheet Travis created for kids to write down their ideas before we let them have a computer. This seemed to mostly dampen kids’ excitement rather than clarify their ideas.

We were also struggling with what tools we should be using and when. During second quarter we chose a tool type for two of the three days of the week – Software Tuesday and Hardware Friday. We primarily played with Scratch and took apart computers and other electronics. But we also teased out the idea of defining tools broadly by just experimenting with other workshops: Travis brought in arduinos, I brought guests from the local bike cooperative to do a bike workshop, we had a parent who worked at an auto-parts store give an intro to the inside of a car, we had guests from our University Makers’ space do a digital embroidery workshop, we did bracelet-making, paper structures, and some science experiments with diapers.

We tried so many things that it felt like we weren’t getting good at anything! It drove me nuts. But my collaborators encouraged me. Todd would talk about technology integration and student-centered learning being “messy.” Martin described our program as a soft roll-out instead of a hard-start. Travis was observant of kids’ projects and frequently met my doubts with examples of kids who were doing deeply creative and complex projects, even if others were still working inside the box.

I still wanted more creativity, more active community building, more collaborative work and more transparency around our goals. In January, we realized that in order to be transparent about our goals, we ought to have some. So we wrote these goals for Tech Time.

And as we continued to talk about our goals during third quarter, we hit on the idea of trying thematic explorations. We did a “Five Nights at Kenwood” theme for software day based on a popular Scratch game called “Five Nights at Freddy’s.” We had students on Hardware Friday brainstorm how we could fundraise to get more hardware tools like Legos. This made space for more small group work and project-based learning. With more kids working on similar projects, it was easier for us to promote the collaborative framework, a series of questions kids can ask each other to help them overcome programming challenges:

We also came up with games to play during our “Community Check-In” that were more about inclusive play. Previously we had struggled through building community by letting everyone talk and kids frequently talked over each other, got bored, and didn’t seem to connect with each other more in spite of our intentions. One game is a derivative of a theater improve game. Kids pass around a simple object like a pen and use the following script to imagine different uses of a simple tool:

Person 2 then becomes “Person 1” and passes the object to the next person around the circle, coming up with a new use for the tool. Participants are encouraged to be dramatic in their dialog!

But even with the theme-based workshops, we were leading kids towards specific tools. So we created a theme for Girls Lead Thursday that specifically avoided naming a kind of tool. The theme was “Design Your Own School.” It was here where I finally allowed myself to let go of the “technology” and center kids’ strengths with tool choices to follow.

On the first Thursday of the quarter, I sat down with a big piece of paper and asked the group of almost all girls to make a list of what skills they had that they could teach to a peer in 5 minutes. We had drawing skills, hair braiding, making goo, dancing, crafts, and writing Japanese, to name a few. We ordered these into a mini skill-share, gathered materials and went outside to make our own school.

The following week we grew the skills-share into bigger sessions of a half hour each– goo-making, Animal Jam tutorial, mural-making and make-up. We planned these workshops and decided who was bringing what, with the kids would be responsible for bringing.

As we did these sessions where kids skills & ideas came first, I began to see opportunities for discussion about the nature and purpose of tools. In the simplest sense, kids had to think about what tools they would need to teach their workshop. This planning was very practical, the kids took a lot of pride in teaching, and sometimes they didn’t plan well and realized they didn’t have the right materials or enough time. These kinds of simple lessons were what we struggled to teach during Scratch workshops by trying to get kids to write down their ideas on “design documents.”

I could see lots of entry points for growing the different skills they brought to the table into larger projects with wider audiences, or using the interests to ask how we could address problems we might see in our community. For example, do the girls doing makeup feel like they need it to be beautiful? Why or why not? How could we build awareness about self-esteem and help each other feel beautiful all the time? There are also relevant news stories, for example trans activists gaining national attention – that could invite questions like how can makeup help us feel more true to ourselves?

And the skills-share or “Ed Camp” format was a great invitation for our adult leaders to sit down and be learners as well, and to model creative play. During the make-up workshop, I got excited about stage make-up and one of our students traced the wrinkle lines in my face to make me look old. When I created an Animal Jam account under the tutelage of a second grader, we laughed together at the silly names.

I’d like to see us start here next year, start by asking kids about their strengths, what they bring to the community to celebrate, and what problems they see that they might design solutions for. But we will continue to have to navigate through the resistance created by stakeholders and societal patters that set us up to be technocentric and thing-oriented. There are some great resources, particularly student-leadership, social justice, and civic engagement tools that I want to work with, some of which I’ve encountered at this conference.

Some of my specific questions are: