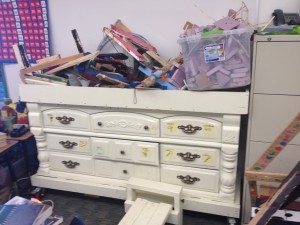 At the Creativity Lab, we understand the worries and headaches that often go along with trying to design and create a makerspace. Just knowing where to begin can be overwhelming. In fact, we hear enough concern over how to create a makerspace that we host an entire workshop on the subject. So, what’s the secret to a “correct” makerspace? (I’ll answer that below), and how do you get started? Here’s how our students did it.

Miniature Makerspaces—Bringing Making Into the Classroom

While some of the making happens in our physical Creativity Lab, we try to extend the making program at Lighthouse into each of the core classrooms. For their last project of the trimester, our seventh and eighth graders built miniature makerspaces for our kindergarten classrooms.

Our kindergarten classes make year-round. They use hand tools (like handsaws, hammers, and drills) to make their own toys and furniture. They make puppets with hot glue. They build scribble machines, sew, program computerized cars, and so on.

“It was clear they needed something for storage and organization, but, more importantly, they needed something exclusively devoted to making. I gave the seventh and eighth graders a limited introduction to the project—that the kindergarteners were making, and that we were going to make a space for them. From that basic starting point, we began to build our collective ideas through research.”
-Jeremiah Jenkins, Middle School Making Instructor

For the seventh and eighth graders tasked with building the makerspaces, this was an exercise in design-thinking,
problem-solving, persistence, collaboration, and craftsmanship.

To start their project, the middle school makers discussed organization strategies, and creative solutions to practical issues. They compiled their ideas in journals, then designed their own ideal makerspaces (they were allowed to be as imaginative as they wanted).

“One student drew a layout of a 3 lift mechanic garage, and another student had a water slide that led to a petting zoo. The designs varied from the practical to the outrageous, but in all cases the students were asked to explain and support their design decisions.”
-Jeremiah Jenkins

Let me take a moment to talk about “design thinking.” Design thinking is a process of exploring creative ideas, with the goal of going beyond simple, primary functionality. We often think of it as designing with empathy. “What would people like?” over simply “What would work?” Design thinking often involves interviewing “customers,” and we consider it a big part of the making we do at Lighthouse. 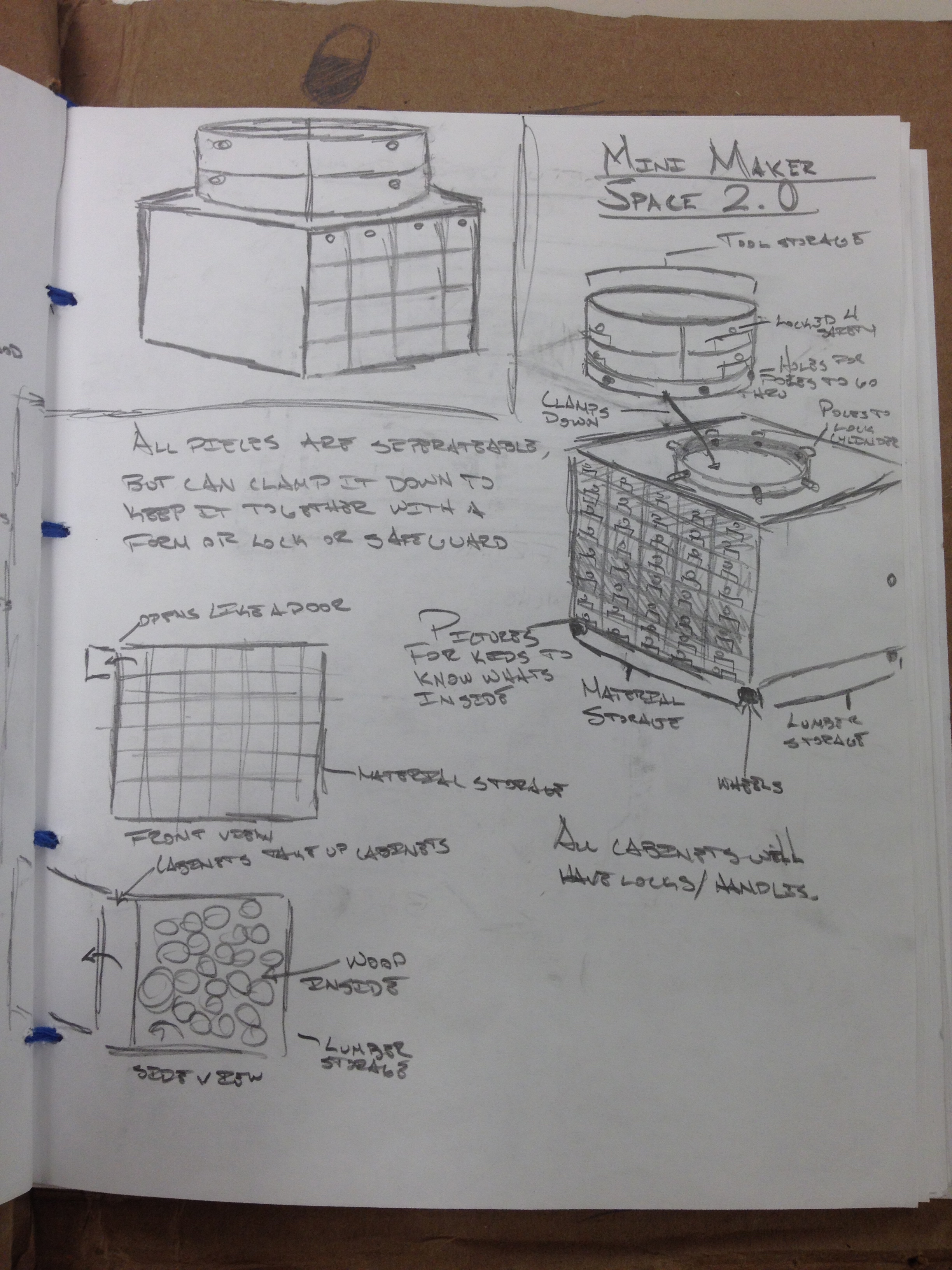 So, once the students had gotten into a creative mindset, they interviewed the kindergarten teachers, asking what would best serve their purposes, and began to narrow their ideas into the more practical. To give the students a starting off point, Jenkins provided each class with discarded dressers that the students would repurpose, keeping in mind each teacher’s needs. Then students were divided into four groups:

Project managers: Scheduled tasks and checked on the groups’ progress.

Function designers: Developed the pragmatic use of the space. Researched storage ideas, and took measurements.

Creative designers: Developed the look and aesthetic experience of the space. Polled kindergarteners to create a space that they would be happy to use.

Fabricators: Worked with the designers to create construction strategies.

These roles were specific to the design phase, and were more or less dissolved during construction.

“When the roles and groups were assigned, students were not “into it” for the most part. As the project proceeded, they took ownership of the roles, and put their minds to them.” -Jeremiah Jenkins

“I liked getting to design the spaces, and having to figure out how to make everything work. It was hard sometimes, but fun to plan and be creative.”
-7th Grade Function Designer

One of the tenants of our making mindset is giving students ownership of their learning—meaning we try to give them space to explore, ideate, and experiment on their own, before giving explicit instructions. Building these makerspaces was no different.

Students worked in groups to develop different aspects of the spaces, with Jenkins meeting with the project managers to give support as needed. (Making sure students stayed on track, and were realistic with their goals.) Seventh graders built a makerspace for one classroom, and eighth graders the other. Here were some of their ideas:

1. Put the dressers on locking casters.
2. Attach a pegboard for tool storage.
3. Build a step stool to help students reach high tools.
4. Secure a milk crate to the space, for extra storage.
5. Build a handle to help transport the space.

Students also had to find ways to brace the bottoms of the dressers, as the dressers had begun to fall apart in some areas.

The construction phase gave students the opportunity to develop their craftsmanship. Jenkins gave instructions on how to use a circular saw (we use battery-powered circular saws that require both hands to be away from the blade to work—for added safety), and students had already gotten experience using drills and handsaws throughout the year. With all of our making that involves tools, students are required to wear safety glasses and gloves. 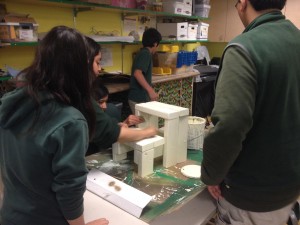 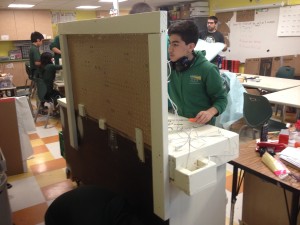 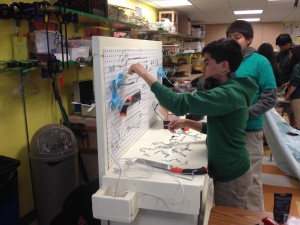 Reflecting on Our Makerspaces

Our kinder classes have already put their makerspaces to use. Are these spaces perfect? Not quite, but they are a step in the right direction. Emily Smith, one of our kinder teachers, liked that her space has kept students’ making more organized—that students have an easier time planning their projects because they can easily find and access all of their tools, and that students are tending to spend more time working on a single project now that they have the means to store them.

“I could definitely see that our kindergarteners were inspired just by the fact that other students designed and built these spaces specifically for them. The kindergarteners also were able to take ownership of their space, by deciding where they were going to put their tools, and how they would label them.”
-Robbie Torney, Kindergarten Teacher

So how could the spaces be improved? What went wrong? Torney says that although the space gives them some storage, they could use more. For his space, the eighth graders had tried to attach plastic garbage cans for lumber storage, but they were flimsy, and broke off soon after construction. Smith appreciates that the seventh graders built a stool for the kindergarteners, but wishes that the spaces themselves were actually lower, so her students could use the counter as a workspace.

And with all of that said, here is the secret to a “correct” makerspace:

In fact, I’ll go ahead and say that that is the secret to making, in general. Plan your project out, but don’t be afraid to dive in and make mistakes. As Seymour Papert says, “You can’t get it right without getting it wrong.” So be willing to get it wrong. Our seventh and eighth graders would be quick to tell you that they could have spent more time planning their projects, done a better job with sanding, and now they can see how their storage spaces don’t quite work for all of the tools that our kindergarteners use. And they’ll use what they’ve learned to do better in the future.

“Most of the projects we did throughout the year incorporated design and fabrication skills, but they were all ‘fun’ challenges. This project was fun at times, but also difficult. Having a client depending on them, and having so much to consider in terms of time and materials I think made students push a little more than with the earlier projects. With this project, I saw in many of the kids a maturing relationship with making.” -Jeremiah Jenkins