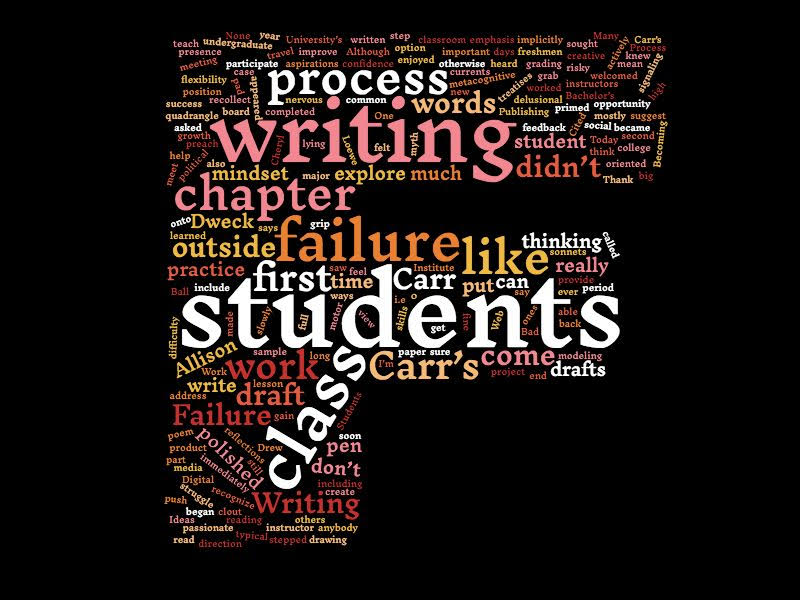 Becoming Comfortable With "Failure" In The Writing Process

The chapter that I selected to teach from Bad Ideas About Writing  (2017) in my first year composition class was “Failure Is Not An Option.” Allison D. Carr’s message in this chapter resonates with me both as a graduate student and teacher. When I was in middle and high school, I wasn’t concerned with failure because I didn’t push myself outside of the academic boundaries that I was made comfortable with. As an undergraduate, I had more flexibility to explore what I was passionate about, and failure became a big part of my success. When I was in the position that my currents students are in (mostly freshmen in college) I had instructors who began to implicitly suggest that failure should be welcomed, if not actively sought out. This signaled,  for me, the presence of creative, risky thinking, and an opportunity to explore a new direction (76).

In our second class meeting, I read Carr’s words to my students and we discussed the chapter. I wanted them all to know up front that in a writing class in particular, where we would work through several drafts amongst our peers, accepting mistakes and failure would be absolutely essential. It is crucial to realize that although we still want to put as much effort into our first draft as we would into a polished draft, that it isn’t the end of the world if our first draft doesn’t come out exactly how we would like it. My guess is that most students and professionals’ polished drafts really don’t even meet their own expectations. This is because writing is a work in progress, and that is why I like how Carr brings the work of Carol Dweck into this chapter.

By teaching Carr’s chapter on failure and Dweck’s “Growth mindset” in my class, and having students reflect on what their words mean, they have come to understand that their writing process really matters. None of the students in my class are currently English majors; most are enrolled in a Bachelor’s of Science degree. Many students came into the class identifying as people who did not like writing. I knew this would probably be the case, so by emphasizing Carr’s words, “We aren’t born pen in hand, fully primed to write sonnets or political treatises as soon as we get a grip on those fine motor skills. Writing is learned slowly, over a long period of time, and with much difficulty, and anybody who says otherwise is lying or delusional or both” students were able to gain a confidence in their writing that I’m not sure would have been there if we didn’t immediately address this common myth (78).

Some of the ways that I have put Carr’s work into practice include: modeling my own writing sample and having students provide feedback to me so they don’t feel like they are the only ones who have to view writing as a process. Students writing metacognitive reflections after they have completed a major paper project i.e., thinking about what their process was like including what they enjoyed and what was more of a struggle for them, also appeared to help them create a growth oriented mindset. Today, my students and I stepped outside the classroom and onto our University’s quadrangle to participate in what I called “travel writing.” With emphasis on process and not grading, I asked students to step outside of their “typical” days full of social media clout and grab a pen and pad to write about what they heard, saw, and felt.

One of my aspirations as an instructor is to practice what I preach. Although I was nervous about this lesson and others being a “failure” when the class is over it is back to the drawing board for me so I can recollect what worked, what didn’t, and what I can improve on. So when I have a student come to me and say that was the first time they have ever written a poem, or when students recognize that process is more important than product, I think of Dweck and Carr. Thank you for reading!

I have been pondering this question as I prepared my poste...
by Deanna Mascle

One way to become "crazy good at the internet" is to hang out with folks who...
by Kim Jaxon

I have been pondering this question as I prepared my poste...
by Deanna Mascle
See All Posts
Collection