During S. Craig Watkins’ connectedlearning.tv session, he explained that Black and Hispanic teens spent more time on mobile devices than White teens. Watkins, a principal investigator of the Connected Learning Research Network and a teacher at the University of Texas, called this the “mobile paradox,” a seeming contradiction to the digital divide. Though they are more likely to live in homes without broadband access, Black and Hispanic teens are bridging the access gap using mobile devices.

Among smartphone owners, young adults, minorities, those with no college experience, and those with lower household income levels are more likely than other groups to say that their phone is their main source of internet access.

In the many links below the archived video of Watkins’ session on connectedlearning.tv is a link to the Kaiser Family Foundation’s Generation M2 study. As I read through that one, I found it curious that the study only categorized time spent with cell phone media three ways: listening to music, playing games, and watching TV. (Here’s the chart.)#

On the other hand, the study categorized computer use in eight ways. (Here’s that chart.) 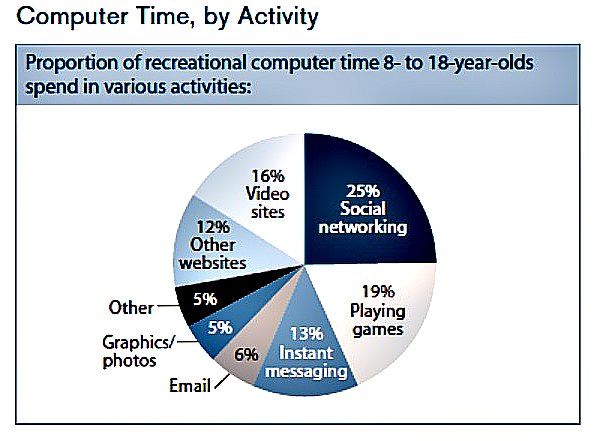 This raised a few questions for me. First, why paint such a limiting picture of mobile media use on cell phones when these devices support all of the practices attributed to computer time? Just by approaching the different devices this way, the report suggests a disparity of media practices that may not exist.

I also wondered, looking at this pie chart, how can researchers make the distinction between “social networking” and these other media practices, many of which also take place on social networks. YouTube probably qualifies as a video site, but is also a social network. On Facebook- the social network- users play games, instant message one another, and create, edit and share photos and videos. “Social networking” is such a general verb that it only identifies the platform on which teens interact with peers and media.

Especially as teachers endeavor to explore interest-driven practices of youth with digital tools, we can continually refine how we examine those practices.

A funny thing happened on my way to the Rhizome sometimes last ...
by Kevin Hodgson

A funny thing happened on my way to the Rhizome sometimes last ...
by Kevin Hodgson
See All Posts
Collection