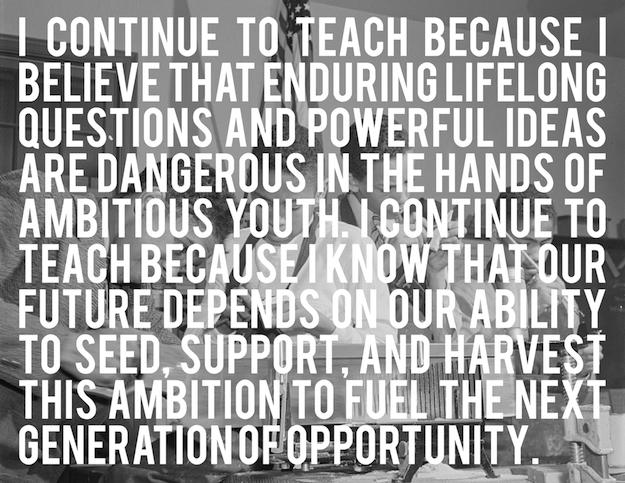 A Love Supreme: Reflections on Why We Continue to Teach | contains a sample of “Acknowledgement” from John Coltrane’s A Love Supreme. Originally recorded December 9th, 1964. © 1964 MCA Records, Inc.

Over the Summer of 2014, we launched a meetup of self-identified Black male educators hosted at The Center for the Study of Race & Equity in Education. What began out of a friendly conversation of our relative scarcity in classrooms transformed into an interdependent approach to move ourselves and others collectively forward in our practice. We came with various backgrounds, various experiences, and various questions about our positionality and our profession. Through impassioned dialogue, we landed on what we all felt to be a generative inquiry into our motivations to become educators, recognizing the overwhelming number of educators who leave the classroom in their first five years. We investigated the interrelatedness between what brought us into teaching and why we continue to stay in teaching. We present this podcast as an exhibit of truthful self-interrogation of unfinished thoughts from a moment in these conversations. The process of recording one’s thoughts leaves a marker in time as even when reciting written words, no audio take is completely the same. We all struggled to balance our truth and its clear delivery to those that will become listeners. Recognizing our imperfections, we uphold that our strivings remain true. The same can be said about our practice as we take the necessary steps to reflect and think critically about how we can support those that we lead and learn from in the classroom. We fluctuate in our delivery daily, yet we hold fast to principles that guide us in our journey. For this illustration, Coltrane’s A Love Supreme becomes the canvas for the journey, emphasizing our supreme love for our work. [total runtime: 25:55]

The son of Trinidadian immigrants, Brendon currently teaches kids World History, African American History and Sociology at the Girard Academic Music Program in Philadelphia. He earned a bachelor’s degree in Political Science from Columbia University and a master’s certificate in Secondary Education from the Penn GSE as a Philadelphia Teaching Fellow. He returned to Penn, as a James Madison Fellow to earn a M.S.Ed in Teaching, Learning and Curriculum with a focus on Gender and Education. Last year he completed the National Board Teaching Certification process. Beyond the classroom, he affiliates with Teacher Action Group (TAG), a group of like minded teachers working to organize, innovate and empower other educators throughout Philly in the midst of this a politically orchestrated school funding crisis. His experience includes work as a Lehrman Fellow, National Constitution Center Annenberg Fellow, and an Education Pioneer Fellow with the SEED Foundation in Washington DC. He is an advocate for public education interested in developing structures that support diversity and student voice in school communities.

Shamir Reese, a special education teacher, mentor, and youth advocate, is currently a special education co-teaching 7th and 8th grade literacy. He has been the only African-American  male SPED teacher in his school for two different schools within a 3 year period. Shamir has been a youth advocate for going on 10 years advocating for youth ranging from Philadelphia, to San Francisco, to Nigeria. Currently, Shamir is volunteering for several mentoring groups, one of which is at his school, Cleveland Elementary, called Men of Mastery.

Kenloy Henry, A Penn Alumni and Bill Gates Millennium Scholar, recently worked in the KIPP Philadelphia Schools system as a High School history teacher. Recently he moved to New York where he has been serving as an advisor and mentor to inner city youth preparing for the college application process. Kenloy is also participates in the Urban Community Teachers Project and the Black and Latino Male Initiative  at Brooklyn College. He is passionate about improving the lived experience of inner city youth. He can be reached at khenry03@gmail.com.

Christopher Rogers works currently as an in-school Media and Technology Specialist, spreading the opportunity for PK-8 students to explore and investigate what the world is to move us closer to what it ought to be. In Spring 2015, Chris will be leading a course at Arcadia University based on integrating community relationships in the classroom. He also is behind a new startup, JustMaybeCo. which aims to reignite teaching and learning through collaborative inquiry between schools and communities. He can be reached at chris@justmaybe.co

Samuel Reed, III, a teacher consultant with the Philadelphia Writing Project, is an active member of the Teacher Action Group (TAG Philly) and has been teaching secondary students to read, write, and make sense of thew world for more than 17 years. He blogs for the Philadelphia Public School Notebook and has previously contributed to  the University of Pennsylvania GSE Perspective of Urban Education. Reed recently won the prestigious 2014 Black Male Leader Award (BMe)   He can be reached at sriii2000@gmail.com.

Raymond Roy-Pace is a classroom teacher, mentor, and servant leader. He began what he describes as a calling into education over five years ago serving communities as an administrator and classroom teacher.  His greatest joys are working with youth in and out of the classroom.  So much so, that in 2011 he began his own non-profit, BeU365.  The mission of BeU365 is to inspire youth through creative education, mentorship and real world experiences. His passion for youth has led him to develop curriculums for mentorship programs, conduct youth engagement workshops and develop teacher trainings. In addition, Ray has served on various panels to discuss prominent issues in education and has also provided commentary, both written and orally, on youth engagement.