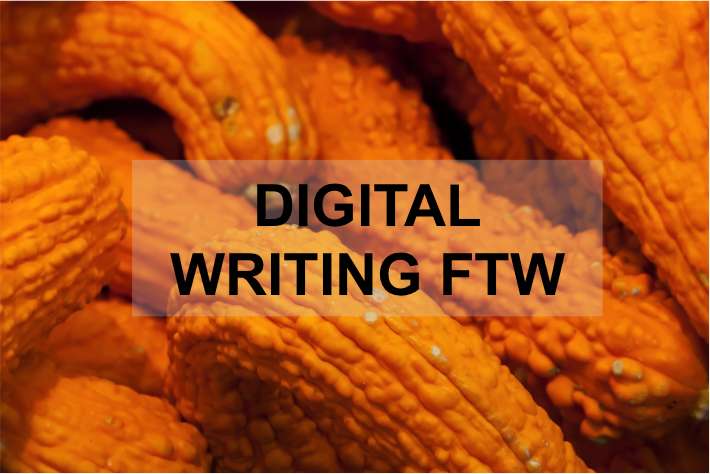 Yesterday was the fourth and final day of the 4TDW digital writing conference, culminating in Kevin Hodgson’s keynote, “A Day in the Life of a Digital Writer”. Kevin blogged about his experience here. As with all the conference sessions, a recording of the session, as well as slides and notes will be available shortly on the 4TDW home page. These are all well worth exploring.

Kevin’s talk was ambitious. He shared his daily composing routine, some of his own individual work, and some of the (very cool) collaborations that have emerged from the 2016 #clmooc experience. Then he introduced the extended conversation about what digital writing is that took place this summer among me, Kevin, Sheri Edwards, Terry Elliott (see his comments on the hypothes.is edition of my blog post), Margaret Simon (see her comments on the blog posts mentioned). His intention had been to spark a conversation about digital writing, but his composing process and compositions were compelling and time just ran out.

The chat that occurred as Kevin talked was also compelling. “Why ‘digital’?” Terry asked, “Why not just ‘writing’?” Troy Hicks responded and that’s where my Aha moment happened.

Troy shared his fear that letting go of the “digital” in “digital writing” would let it fade into the general pool of “teaching writing”. That’s already so fraught with challenges that digital writing would likely disappear completely.

It was easy to flesh out Troy’s comment. Historically, teachers have found teaching writing to be daunting. Old-fashioned ideas of the “right”– i.e., prescriptive, rule-heavy– ways to teach writing hang on despite decades of research that show these ideas don’t work. And, today’s testing-inspired “argumentative” writing has unnerved many teachers to the point they abandon what’s known about best practices in favor of the safer, so-called “way it’s always been”. The result? Say hello to the resurgence of advanced forms of the five paragraph essay. In short, much writing instruction isn’t so great these days. Without the distinction of digital writing, the old adage out of sight out of mind becomes the operating principle. Why wade into the digital world when the required world is already so hard?

So many teachers don’t explore the digital world. So many teachers actively resist it. Troy and others have written passionately about this. (See below for some references.) So where does that leave the discussion about whether digital writing exists?

I’m thinking that the discussion isn’t relevant for people just dipping a toe into the digital waters. Those of us who write and play in the new digital landscape have had more time– and experience– to think about nuances of writing/digital writing. Just as experienced writers draw on their expertise to coach other writers without sharing everything up front, experienced players in the digital fields probably would do well to learn from that.

Our experiences have brought us to a place where we’ve been comfortable exploring what the term “means”; that experience has helped us tolerate the uncertainties of the questions we’re exploring. So, while our questioning can push our thinking about some of rationales and methods we use to support novices to enter this new world, I’m thinking I’ll embrace the term digital writing, warts and all.

Cross-posted from my blog, All Hands on Deck